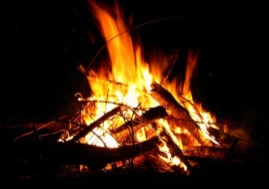 Heavy winter rains fueled dense growth of brush, which poses a severe fire danger as it dries out.

The ban also prohibits campfires on public lands to only facilities and firepits in established campgrounds. Cooking fires are allowed with a valid permit when no other means of cooking are available. A permit and on-site inspection are required for warming fires.

The suspension does not cover campfires on private property, officials said.

While rains as late as May are expected to delay the brush fire season, a  report published in May by the National Interagency Fire Center found that while the fire season was off to a slow start, California can still expect “above normal” potential for large wildfires this summer as those grasses dry out, providing tinder for explosive fires.

Cal Fire has already responded to more than 800 wildfires this year, the Los Angeles Times reports, including recent brush fires locally in Dulzura that shut down highway 94 last week.