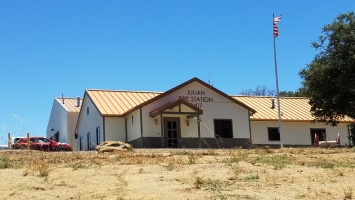 VIDEO of December 13 JCFPD Board Meeting

December 28, 2018 (Julian)--The knockdown, drag-out fight between CAL FIRE and the San Diego County Fire Authority versus the Julian-Cuyamaca Fire Protection District (JCFPD) went another round last week when County Supervisors voted to hold a special election in Julian this spring.

Julian citizens gathered enough signatures to put the fate of the JCFPD to a direct special election vote on Mar. 19, 2019. But Supervisors’ decision to confirm the people’s right to vote on saving the county’s last volunteer fire district from a county takeover has done little to heal the smarting.

Cal OSHA was called out on Nov. 30 to Julian Fire Station 56 to enforce an order by County Fire Authority Chief Jeremi Roesler requiring that all JCFPD firefighter Personal Protection Equipment (PPE) be inspected and inventoried. He unilaterally directed that all firefighter “turnouts” or PPE gloves, jackets, helmets – be inspected and inventoried for official reasons unknown to him. Each set of PPE or “turnouts” is worth about $4,000 dollars.

Instead of notifying the JCFPD or volunteer firefighters beforehand of the inspection, the search was conducted unannounced and numerous pieces of gear were removed from service. The Sheriff was notified when firefighters’ personal property was allegedly taken. 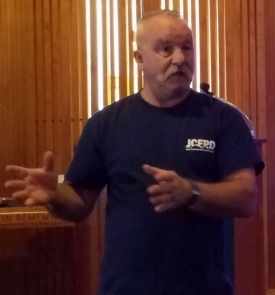 “Cal Fire rendered three-quarters of our equipment as unserviceable, out of service, not serviceable. This was stuff given to us by the County Fire Authority just seven years ago,” says JCFPD Chief Mike Van Bibber (photo, right)

Roesler, who heads emergency services for the Julian area for the San Diego County Fire Authority on behalf of CAL FIRE, was not personally present at the inspection.

ECM reached out to Roesler for a comment on the incident but he did not respond.

Brian Kramer, a member of the JCPFD, says the previously unannounced inspection is without precedent. “The people who were brought in to inspect the gear have had absolutely no training in performing an inspection of this protective gear,” he states. “There are specific guidelines published by the National Fire Protection Association on how to conduct such inspections and how to judge the condition of this personal protection gear,” Kramer explained.

The equipment was given to the JCPFD seven years ago by the County Fire Authority in reciprocity of services which had been rendered to the authority by the JCPFD. Kramer says the gear is rated for heavy-duty use at level of 5000 uses over a ten-year period. “We are a low-level use rate. We maybe service just 500 calls a year since we got it several years ago and the gear is practically like new,” Kramer says.

The call for the loss of personal property comes on the heels of yet another situation where a hard drive was removed from a main server computer in the offices of the JCFPD but ended up being anonymously returned after a police report was submitted to the Sheriff.

Van Bibber says the main concern was that the drive had internal documents which may have been copied from the hard drive.

ECM has requested a copy of the police report from the County of San Diego.

Despite the political tumult, medical and fire emergencies in the community of Julian are being fully staffed by the JCFPD, Cal Fire and by the County Fire Authority staff on Engine 256.

But supporters of the volunteers say they don’t trust the county or Cal Fire to maintain service. That lack of confidence in both the County Fire Authority and Cal Fire was not helped in June when the JCFPD’s volunteer firefighters’ 800 MHz operation radios were turned off by Chief Roesler. 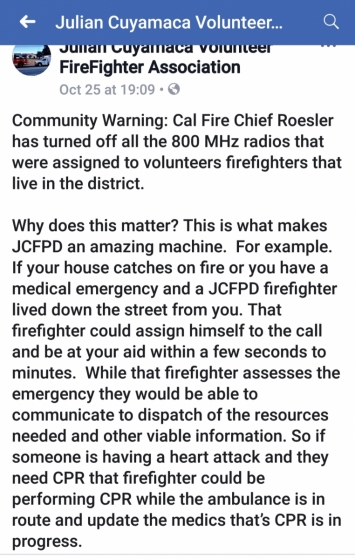 tement (photo, left) from the Julian Cuyamaca Volunteer Firefighter Association (JCVFA) published on Facebook on Oct. 25 says, “Why does this matter? This is what makes JCFPD an amazing machine. For example, if your house catches on fire or you have a medical emergency and a JCFPD firefighter lives down from the street from that, that firefighters could assign himself to the call and be at your aid within a few seconds to minutes. While that firefighter assesses the emergency they would be able to communicate to dispatch the resources needed and other viable information.”

However, after a vote by the newly elected JCFPD board earlier this month, the volunteer’s radios have been turned back on, keys returned, and Battalion Chief Mike Van Bibber has reassumed his management responsibilities.

Despite the setbacks, supporters are confident that the political tide may have turned when two new members, Mike Menghini and Eva Hatch were sworn into the JCFPD board earlier this month. Both have stated they support keeping the district independent from Cal Fire and the County Fire Authority.

During the board’s Dec. 13th meeting, Menghini was named president and Buddy Seiffert was named the vice president. Aida Tucker was absent from the special meeting. The board also decided to eliminate the financial service administrator position held by Marcia Spahr in a belt-tightening move. The responsibilities will now be handled by several community members.

ECM has learned that board member, Aida Tucker, has since resigned. Tucker, a 14-year member of the board, stated in her resignation letter to the board, “I can no longer participate given the current direction of the board.” She accused fellow board members of “misrepresentations to the public” and claimed that a special meeting was not properly noticed and that a change of board meeting days will prevent her from attending due to scheduling conflicts.

Interim Cal Fire/County Chief Roesler, installed by the former board, will now be in charge of only the Cal Fire employees in the station. Previous to that, Cal Fire/County had controlled the entire volunteer station since the June takeover.

A Julian community activist who asked not to be identified states, “With the new board and administration in our Julian Cuyamaca Volunteer Station, they now have the ability to direct our district toward independence. No volunteer agency has ever made it this far to prevent being dissolved by LAFCO into the County. Julian is the first in 50 years, so there is no precedent on the part of LAFCO on how to proceed. Julian is making history.”

Pat Landis, a former board member who has been active in efforts to keep the district independent, is optimistic that Julian’s independence from Cal Fire and the County could be at hand. But she is not ready to declare victory. “While the county may be backing off for now, we won’t really know the direction things will be going until Mar. 20, the day after the special election,” she says.

Chief Van Bibber observes, “We want to continue the relationship with Cal Fire and the County as we have had it in the beginning.”

Last week, the JCVFA announced on Facebook announced that CAL FIRE has moved out of the Julian Fire Station and back into their station across from Julian High School. “We now have 3 fire stations and 3 fire departments (CalFire, Cleveland National Forest, JCFPD) fully staffed and operational. This is how it was before the County intervened. This is the best possible scenario for Julian,” the post concludes.