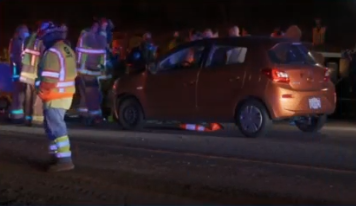 November 18, 2020 (El Cajon) –California Highway Patrol, San Diego Sheriff and San Miguel Fire Department personnel responding to a report of a pedestrian struck by a vehicle around 12:31 a.m. found a Caltrans worker who was unresponsive on State Route 94 east near the Avocado exit.

Other Caltrans workers told authorities that a driver traveling on the wrong site of construction cones struck the worker and dragged him approximately 40 feet, ECM news partner 10 News reports.

Despite CPR performed by first responders, he could not be revived and was pronounced dead at the scene. The woman driving the copper-colored vehicle that caused the fatal accident stayed at the scene and cooperated with authorities, according to 619 News Media.

Twenty minutes later, two vehicles stuck in traffic waiting for the freeway to reopen about a mile away were rear-ended.  Three patients were injured and transported for treatment at a local hospital.

I am so grateful to all the Caltrans workers. Rest in peace dear Sir. Sadly, this makes me even more thankful for their high quality dangerous work. It's dangerous work, but so necessary. Thank you so much to you heroes out there every day and night keeping us safe and keeping our freeways in tip top shape, continuing to improve, upgrade and maintain our freeways, keeping our roads (and economy) running smoothly and continuously improving. God be with this man's friends and family, and bring you peace and pride knowing that your father/brother/son/uncle/cousin/friend died a hero.

Traffic cone patterns can be difficult to understand, especially at night. I was going to work one night and approached one, there was a very short period of time to make a decision.