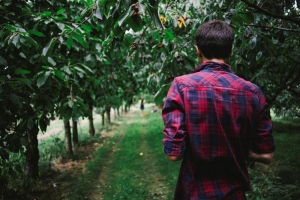 December 26, 2016 (Los Angeles) -- Some people in California are scrambling to get their identification and work documents in order by January. They are immigrants, concerned about President-elect Donald Trump's campaign promise to deport some 11 million undocumented people.

Some experts think worker roundups are unlikely, given how dependent the state's economy is on immigrant labor.

California's lucrative agribusiness is structured around low-wage immigrants - and having to replace them with higher paid workers could throw farm profits out of whack, says Steve Suppan, a senior policy analyst at the Institute for Agriculture and Trade Policy.

"Let's say you take the average wage up to $15 an hour, and you include benefits," he points out. "That changes the pricing structure of agriculture, and then it becomes questionable whether, for example, the confined animal-feed operation business model is viable."

For the most part, California has welcomed its 2.4 million undocumented immigrants with a pathway for obtaining driver's licenses, health care through Medi-Cal, and college scholarships.

Now, there's a proposal by Democratic state lawmakers for a fund to help cover legal fees in deportation disputes.

Given the powerful influence of the farm lobby, it may succeed in keeping its workforce in place, in California and across the country. But Suppan does think some deportations will happen, perhaps as a show of force by the new administration.

"There are going to be, definitely, some fairly spectacular roundups, at least of the type that will show, you know, 'victory for America' - the immigrant deportation variation on the 'Carrier saving 700 jobs,'" he states. "So, I expect to see a fair amount of public relations outreach concerning migrants."

Some California communities are already bracing for the possibility. The Los Angeles County Board of Supervisors votes in January on creating a $10 million fund for immigrant legal defense. Santa Clara County is also looking into the idea.