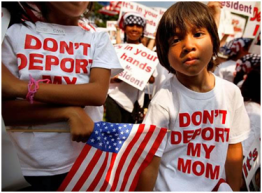 The tie lets a lower court decision stand, blocking two of the president's executive orders. One program, Deferred Action for Parents of Americans and Lawful Permanent Residents (DAPA), would have given temporary work permits to parents of U.S. citizens and legal residents. The other is an expansion of the Deferred Action for Childhood Arrivals (DACA) program, which gave a reprieve to certain people brought to the U.S. as children.

"This is really sad for the immigrant community," said Antonio Bernabe, organizing director for the Coalition for Humane Immigrant Rights of Los Angeles. "They are really disappointed, hoping for a real solution. Now they are still fearing for their families, fearing for themselves, living in terror every day."

The next U.S. president will fill the vacancy on the Supreme Court and determine the new majority. This decision all but guarantees the prediction that Latino voters will turn out in record numbers this November.

The Supreme Court's decision is online at scotusblog.com.

illegal aliens should be in fear and should be prepared to return to their place of origin. to expect the citizens to pay for them and to provide new voters for the anti American demoncrat party is criminal