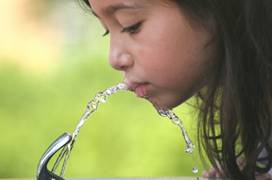 January 17, 2017 (Sacramento) -- In an effort to further safeguard California’s water quality, K-12 schools in the state can receive free testing for lead under a new initiative announced today by the State Water Resources Control Board.

The Board is requiring all community water systems to test school drinking water upon request by the school’s officials.

There are approximately 9,000 K-12 schools in California, most of which are served by more than 3,000 community water systems in the state. While these community water systems extensively and regularly test their drinking water for lead, lead could get into clean water at a school campus if there were corroded pipes or old fixtures at the school.

Because California has newer infrastructure and less corrosive water than other parts of the country, lead problems at the tap are uncommon. However, national events have highlighted the importance of ongoing water quality monitoring and in 2015 Governor Edmund G. Brown Jr. directed the State Water Board to incorporate schools into the regular water quality testing that community water systems conduct at customer’s taps.

“While the presence of lead in California’s water infrastructure is minimal compared to other parts of the country, additional testing can help ensure we are continuing to protect our most vulnerable populations,” said Darrin Polhemus, deputy director of the State Water Board’s Division of Drinking Water.

Under the new requirement, testing is voluntary for schools, but if the schools make a written request, the community water systems must collect the samples within three months and report the results back to the school within two business days. Sampling locations can include drinking fountains, cafeteria and food preparation areas, and reusable water bottle filling stations. The one-time program extends until Nov. 1, 2019.

The community water systems are responsible for the costs associated with collecting drinking water samples, analyzing them and reporting results through this new program. In addition, the State Water Board’s Division of Financial Assistance will have some funding available to assist with addressing lead found in tests, with a particular focus on schools in disadvantaged communities.

Under the federal Lead and Copper Rule, the U.S. Environmental Protection Agency already requires public water systems to test for lead at customers’ taps, targeting the highest risk homes based on the age of their plumbing. California’s compliance rate with the Lead and Copper Rule is among the highest in the country, but the rule does not require testing for schools and businesses. The Board’s new requirement ensures schools that want lead testing can receive it for free. The Board consulted with water systems and schools in developing the requirement.

Existing federal and state programs provide guidance to help schools determine if a lead problem exists and how to remedy the contamination. And many school districts have already implemented testing programs.

Protecting children from lead exposure is important for their development and lifelong good health.