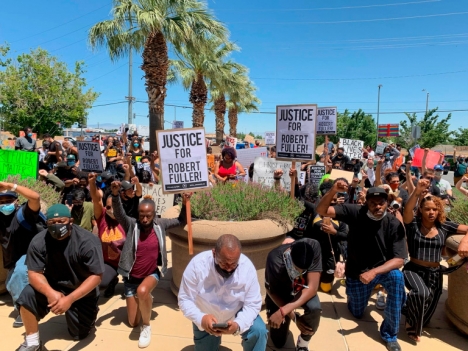 Photo:  activist Najee Ali, center, kneels with weekend demonstrators in front of the Palmdale Sheriff's station as protesters demand an investigation into the death of 24-year-old Robert Fuller, who was found hanging from a tree early Wednesday. On Monday, state Attorney General Xavier Becerra agreed to get the state involved. Photo by Josie Huang/KPCC/LAist via AP

June 18, 2020 (Palmdale, Calif.) - California’s Justice Department will send officers to Palmdale to investigate the hanging death of a black man — one of two similar incidents in the high desert over the last few weeks, Attorney General Xavier Becerra announced this morning.

The Los Angeles Sheriff’s Department initially characterized Fuller’s death as suicide. The families of both Fuller and Harsch dispute the notion that the two men took their own lives. Over the weekend, Los Angeles County Supervisor Kathryn Barger and the City of Palmdale joined activists in saying they want state investigators to look into Fuller’s death.

Becerra is now agreeing to their request.

Investigators “will assess what has been done so far by the local investigators,” he said at a press conference. “We will do it working with the (Los Angeles) Sheriff’s Department, but we also have the independent authority to do it on our own if necessary.”

He declined to say whether the department will also launch an inquiry into Harsch’s death, which took place in neighboring San Bernardino County.

And in yet another indication that the wave of national protest against racism and police brutality may be permanently shifting the political conversation around law enforcement, Becerra also announced a new list of policy recommendations this morning.

He said he would support or sponsor legislation that would allow state regulators to decertify police officers who have engaged in “serious misconduct,” and legislation “to reexamine the role of police in addressing homelessness and mental health in our communities.”

Becerra also called on police departments to require their officers be trained in de-escalation, to ban chokeholds and other neck restraints, to ban the use of pepper spray on children in juvenile detention and to replace “find and bite” and “bite and hold” police dog techniques with a “circle and bark” strategy.

He also called for police agencies to establish procedures in which deadly force is used only as a last resort — a new state law approved last year already revised the standards for police use-of-force.

Many of the proposals were drawn from recommendations the AG’s office made to Sacramento last year in the wake of the fatal police shooting of Stephon Clark.

Becerra has carved out a progressive reputation for himself as anti-Trump warrior in the courts. But as the top law enforcement officer in the state, he has been much slower to embrace legislation to impose new restrictions on local police. 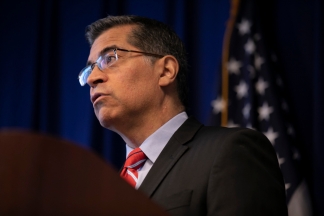 His office has refused to provide police misconduct records to news outlets who have applied for them under a 2018 state disclosure law, despite a series of court rulings and a public scolding from the law’s author.

Becerra and his predecessor Kamala Harris — both Democrats and the state’s first two attorneys general who were people of color — also did not support past legislation that would require the Attorney General’s office to investigate police shootings, taking that responsibility away from local authorities.

Partly as a result, the state Justice Department has limited authority to mandate such changes at the local level. But Becerra’s announcement comes just a day after three major police unions in California threw their support behind a similar batch of reforms.

Organized labor groups representing officers in the Los Angeles, San Jose and San Francisco police departments announced they would support a national use-of-force standard, the creation of a national database of officers fired for gross misconduct and broader de-escalation training. The unions say they will publish full-page ads in major papers across the state and in The Washington Post.

“Police unions must root out racism wherever it rears its ugly head and root out any racist individual from our profession,” read a joint statement issued by the three unions.

Some critics deemed their endorsement insufficient, noting that departments that have adopted or been forced to adopt such measures still continue to have incidents of unacceptable and racist police violence. But regardless, the sponsorship of such an ad by police is an indicator of how the conversation is shifting.

In Minneapolis, where the killing of George Floyd has sparked weeks of unrest, the city council passed a resolution to dissolve the police department entirely and build a new agency from scratch. In Los Angeles, Mayor Eric Garcetti agreed to shift $100 million from the city’s police department’s $1.2 billion budget toward community health and economic development programs — rejecting a proposal by Black Lives Matter activists to cut funding by 90%. In California and New York, some progressive lawmakers have pledged to no longer take campaign cash from unions representing law enforcement officers.

Unions that represent rank-and-file law enforcement officers have traditionally been among the most vociferous opponents of new legal restrictions on officers or increased accountability measures. But with talk of defunding police departments entering the mainstream political debate, groups representing law enforcement officers may now feel compelled to make concessions in order to fend off those more sweeping changes now gaining currency.