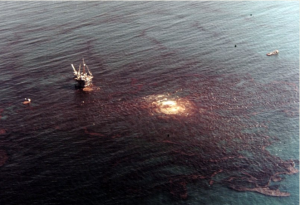 April 29, 2017 (San Diego) – The Santa Barbara oil spill of 1969 was the worst environmental disaster in U.S. history at the time.  Three million gallons of crude oil contaminated the ocean and beaches with thick, black goo. Oil bubbled from the blown well and from cracks in the sea bed, killing countless sea birds, seals and other marine life.

The last remaining oil derrick off California's coast is slated to be decommissioned,  Public News Service reported last week. But now an executive order by President Donald Trump could result in offshore oil wells again pumping in the waters off California.

The toxic pollutants lingered for years; as a student at the University of California, Santa Barbara in the late ‘70s, everyone kept turpentine to clean tar off your feet if you walked at the beach and once, I had to cut chunks of my hair off after an ocean swim when a large clump of tar became stuck in my hair.  The odor of tar remained in the air, years after the spill, and the finish on my car was pitted from tar granules in the air we had to breathe.

That spill launched the environmental movement, leading to passage of the National Environmental Policy Act signed into law by President Richard Nixon that same year, and the first Earth Day celebration in 1970.  The environmental disaster affected me personally, motivating me to pursue a degree in Environmental Studies and a minor in political science in hopes of helping to prevent such a fiasco from every occurring again.

Today, the Santa Barbara spill of 1969 ranks as the third worst oil spill, surpassed by the Exxon Valdez off Alaska and the Deepwater Horizon blowout in the Gulf of Mexico.  I visited Alaska two decades after the Exxon Valdez disaster, and you could still see black globs of oil washing onto rocks along the shore.  Yet another oil spill occurred off Santa Barbara in 2015, thankfully much smaller, but an ugly reminder of how swiftly our pristine beaches can become toxic waste dumps, harming both the environment and our tourism-based economy in California.

I knew workers who went to the Gulf to help with cleanup efforts after the Deepwater Horizon spill.  Privately, I was told actions were taken to sink much of that oil to the bottom of the sea, where it remains –a ticking time bomb that continues to slowly pollute the waters that produce much of the seafood the nation consumes.  Some felt ill from the petrochemicals to which they were exposed.

So I felt sick to my stomach at news that President Donald Trump this week signed an executive order to open up vast tracts of the Pacific, Arctic, and Atlantic oceans to new oil and gas drilling, ostensibly to “make America energy secure” and “create greater prosperity” for all Americans.   He has asked the Department of Interior to study new oil and natural gas drilling off California’s coast.

Many political leaders in California have long sought a permanent ban on new offshore drilling. Trump’s action unravels protections put in place by President Barack Obama, a plan that did not include any new drilling leases off our coast through at least 2022.

Trump’s order will face legal challenges.  The first legal volley has been fired by California Attorney General Xavier Becerra, who announced Friday, “We will vigorously oppose new drilling off the shores of our coast. California is leading the way in clean energy production and policies that preserve our state’s pristine natural resources.”  California’s Attorney General concludes, “Instead of taking us backwards, the federal government should work with us to advance the clean energy economy that’s creating jobs, providing energy, and preserving California’s natural beauty.”

Greetings all, boy there sure is some negativity on here. But all in all very informative.
I logged out by mistake. Anyway.... a post awhile back seemed to suggest that Miriam Raftery (spelling?) was not objective in writing for the East County Magazine and has her own agenda. This is odd, as everyone has their own agenda. Miriam happens to own the ECM, so her JOB is to publish and write for it. As far as not being objective & having your own agenda, I'm reminded of a tv show I watched several years ago. As a matter of fact, George W. Bush (43) was still President. On the O' Reilly Factor, a guest was U.S. Congressman Dennis Kucinich from Ohio. Kucinich was the former Mayor of Cleveland I think. Of course O'Reilly is conservative & Kucinich is liberal. Also Kucinich was very anti-Bush, so you knew O'Reilly was really going to give it to Kucinich, which he did. What did Kucinich say about O'Reilly giving him the harsh treatment and hardly allowing him to talk? "Well Bill, this is your show, so I don't really have much choice". Regards.

I do not  "own" East County Magazine. I am the founder and editor.  ECM is part of the nonprofit Heartland Coalition, whose CEO  has multiple PhDs and has in the past organized two international conferences to educate the public on climate change and environmental issues based on actual scientific facts.  Neither Heartland nor ECM profited off any of that, by the way.  These were open to the public at SDSU and Qualcomm, with prominent scientists, researchers, green tech and clean tech leaders, etc. I have personally interviewed some of the world's top climate scientists, and  volutneered my time for those assignments -- unlike those who tout climate change denial and are well paid to spew false statements. My degree is in Environmental Studies from UCSD, where I studied under a prominent climate scientist whose predictions have all come to pass thus far.

Heartland does many other things such as providing programs to bring job training, education and create actual jobs for disadvantged youths, and they  helped Cedar Fire victims rebuild their lives after the devasting firestorm.  Heartland is fully behind our reporting and accurate portrayal of issues in the energy field.

One fact I did not include in the story above originally is that Heartland trained local people to go fill jobs in the Gulf Coast to help clean up after the oil spill. I talked to some of those folks as well as other contacts I had in the gulf, and heard a lot of details about how the oil company was covering up the full extent of the damage.  Oil spill damage lasts for decades, maybe longer.  While some can be cleaned up faster than in the fast, much of the daamge can't.  Some of the oil sank to the bottom of the Gulf, where it can't be reached and will continue to slowly wreak havoc for many years to come. It contaminated the shrimp supply from the GUlf. It polluted beaches. It made people sick. Some delta residents had to move away.

Why do you want to attack me for telling truth and seek to cover up the real harm that oil spills cause?  Are you employed with the oil industry or politicians who take their money and profit off covering up the reality?

I have published over 2,500 articles in major national and regional publications before starting ECM, and I have personally won over 300 jouranlism awards including many of the top awards in the journalism field locally and some nationallly.  ECM has won 97 journalism awards.  Our commitment is truthful reporting, wherever that leads.

At ECM we have at times published reports that were negative to Democrats as well as Republicans.

When Jerry Brown refused to hear concerns of East County residents on Powerlink or meet with those opposed, we had critical cover of his ties to energy companies including his sister on the Sempra or SDG&E board.  When Obama appointed a lobbyist for SDG&E/Sempra to be the number two guy at the Dept. of the Interior, we took on that issue, too.  If Trump has conflicts of interest, or is touting propaganda from the fossil fuel industry that conflicts with scientific facts, we will advise our readers of that, too.

We've pubilshed news on scandals involving politicians in both parties, such as re: Democrats, the Filner sexual harassment stuff (we were among the first to interview a prominent witness) or Ben Hueso's DUI arrest,  as well as scandals involving Republicans such as the Hunter campaign finance investigation or Joel Anderson being fined by the FPPC for funneling money into his campaign that was far over the legal limits.

Anyone who wants fake news,  one-sided partisan political coverage,  or coverage that ignores facts scientifically proven beyond any reasonable shadow of doubt, is in fact asking for propaganda. If you want that, go read Russian Times. Many issues have two sides or many sides, and we have always been fair in presenting all sides as long they are fact-based,  as well as issues where there are two sides based on opinions (such as whether abortion is morally right or wrong). But when someone touts outright false statements, that's not something legitimate journalists should publish.

I draw the line against anything false. If someone claims unproven or dangerous medications, drugs, herbs, etc. are safe when they've killed lots of people, I'm not going to publish an "opinion" that is based on lies and that can harm people.  Lying about climate change is harmful to everyone on our planet.

... you know I am a Goldwater Conservative but, should be enough oil on land? I thought we were exporting oil already?