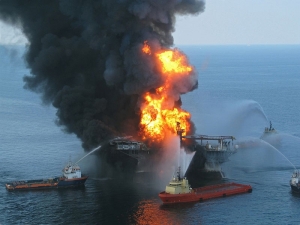 Reuters reports that Lieutenant Governor Gavin Newsom, who is running for Governor, says he is determined that “not a single drop from Trump’s new oil plan ever makes landfall in California.

The State Lands Commission is also objecting to the plan, arguing that the U.S. Department of the Interior has not scheduled enough public meetings in California to get input from residents here.

Interior Department spokesperson Heather Swift has said that for all coastal states in the U.S., a total of 23 meetings are planned.

California leaders point to serious harm to tourism, a key economic driver, from devastating oil spills such as those that have occurred in Santa Barbara and the Gulf Coast region.

Inexplicably, after Florida objected on similar grounds, Florida was removed off the list of offshore drilling options.  President Trump’s Mar Lago resort, where Trump and his family spend much of their time, is located on Florida’s coast.

They will just pump it in a tanker and move it to where it is welcome. You can't stop a good capitalist.

It's called favoritism, or NIMBY (not in my back yard) Of course he will deny what we hear as "FAKE NEWS", unless of course it benefits him, or inflates his ever growing "HUGE" ego.