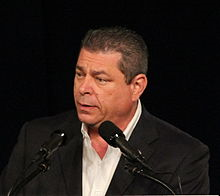 Update November 30, 2018:  Bauman has now resigned, stating, "I have made the realization that in order for those to whom I may have caused pain and who need to heal, for my own health, and in the best interest of the Party that I love and to which I have dedicated myself for more than 25 years, it is in everyone’s best interest for me to resign my position as chair of the California Democratic Party."

The powerful chair led the party to sweeping victories that included Democrats winning every statewide office, veto-proof two-thirds majorities in both houses of the state Legislature, and picking up numerous Congressional seats to help Democrats take back the majority in the House of Representatives.

Most of the allegations involved harassment of men by Bauman, who is gay, including a 17-year-old who indicated Bauman discussed thoughts of “rough sex” with him.  But the victims also included women, including one who provided the Times with email exchanges with Bauman as documentation.

Bauman has taken a leave of absence and indicated he will be seeking treatment for alcohol abuse, stating “I deeply regret if my behavior has caused pain to any of the outstanding individuals with whom I’ve had the privilege to work,” the L.A. Times reports.

Democratic Party policy prohibits sexual harassment of any form. Ironically, during the height of the #MeToo movement last year when sexual harassment claims roiled around other prominent public figures, Bauman stated, “Nobody should go to work and be in fear, be looking over their shoulder or dodging down the hallway because a bully or harasser is coming.”

Hayes, San Diego’s party chair, posted on Facebook, “In support of our Vice Chair in the South Area, Kelvin Barrios, I am joining the call for our California Democratic Party Chair, Eric Bauman, to step down. He has been a great leader and brought us terrific results but the Party can no longer continue on in good health with him at the helm. As County Party Chair and a member of the State Party's Executive Board I also ask for an Emergency meeting of our Board to be scheduled as soon as possible.”

The party’s executive board has the power to remove Bauman from office, if it so chooses.

Officially, Bauman is on leave while an outside investigation is conducted, party spokesman Mike Roth told Associated Press, NBC reported on November 26th.  “The Party is confident that the procedures in place will allow for all parties to come forward freely and provide for a thorough and complete review.”

Former San Diego County Democratic Party Chair Jess Durfee has indicated on Facebook that he sent Bauman a text urging him to resign.  On Facebook, Durfee wrote,“For Kelvin and the others who were victims of Eric’s behavior - I’m sorry for the pain he caused you. Thank you for being strong and speaking out.”

Democrats need to dispassionately maintain their principles for anyone to believe in them. It has been hard, hard, hard to get even rank and file Democrats to own how marvelously disastrous the Clinton's sexual harassment (Bill) and email peccadilloes (Hillary) have been for the party. If there is a party among our two major parties that can rise beyond its tribalism and hypocrisy, well the Dems seem orders of magnitude closer with the President making Richard Nixon look like a Boy Scout. But Dems can't get there unless they own mistakes, like they did with senator Al Franken. That and stealing a few more good ideas from the Green Party and pretending that those ideas are their own, and you might actually have a viable political party.