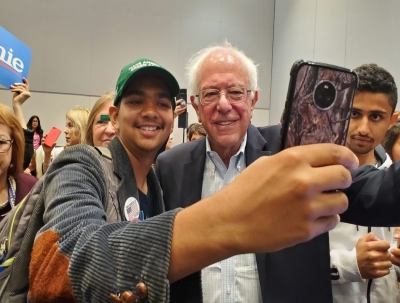 June 4, 2019 (San Diego's East County) - Anyone who spent the weekend at the California Democratic Party’s convention—watching 14 White House contenders try to impress what one Congresswoman called “the wokest Democrats in the country”—observed the following:

Saturday’s most rapturous cheers went to Massachusetts Sen. Elizabeth Warren, who declared “the time for small ideas is over, advocated “big, structural change” and said “I am here to fight.” Sunday’s thunderous applause went to Vermont Sen. Bernie Sanders, when he demanded there an be  “no middle ground” on climate change, healthcare or gun violence.

But those who strayed from progressive orthodoxy did so at their peril.

Ex-Colorado Gov. John Hickenlooper dismissed the push for single-payer health care by insisting “socialism is not the answer” Saturday and drew a sustained barrage of boos—not just from those who embraced the label, but from those who resented it. The following day, Maryland Rep. John Delany’s dismissed Medicare-for-All as “not good policy,” and faced heckles and jeers.

The San Francisco confab was the state Dems’ first get-together since last year’s blowout election returned the party to its majority in the House and devastated the ranks of elected Republicans in California. The delegates left no doubt that as they prepare for the 2020 election against President Donald Trump, they are in no mood for compromise or equivocation.

At least not when it comes to ideas that energize them.

But state party conventions—dominated in decibels by faithful partisans and zealous activists—often offer an exaggerated, funhouse-mirror reflection of what the party’s voters statewide actually think. And even the delegates can be more temperate  than the room might suggest.

In one of the few choices that the 3,200-plus delegates actually made, a majority eschewed more progressive candidates and easily elected as the party’s next chairman Los Angeles labor leader Rusty Hicks. He’s a soft spoken white guy from Los Angeles who represented what many called the “safe choice.” 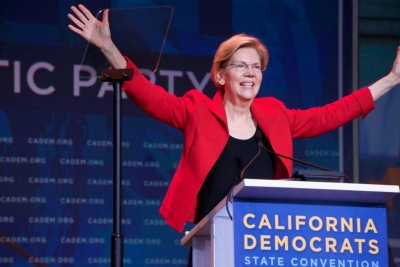 Still, they gave an effusive reception to speakers who jettisoned safe choices. Here was Warren: “Too many powerful people in our party say, ‘Settle down, back up … wait for change until the privileged and powerful are comfortable with those changes,'” she said. “Here’s the thing — when a candidate tells you all the things that aren’t possible … they are telling you they will not fight for you, and I am here to fight.”

Few of the presidential candidates addressed California issues specifically, in the way they become conversant about, say, ethanol in Iowa. Washington Gov. Jay Inslee, who’s made climate policy a thrust of his campaign, talked about visiting the wildfire devastation in the California community of Paradise, and some candidates called for greater regulation of tech firms. But mostly their speeches sidestepped California-specific concerns and aimed wide in appealing to what Oakland Rep. Barbara Lee called the “most progressive and the most democratic and the wokest Democrats in the country.”

“This is obviously a group of activists and there are obviously some candidates who appeal more to the activists,” Dave Min told CALmatters at a meeting of the Chicano and Latino Caucus. He lost a bid for Congress in 2018 to Rep. Katie Porter, who was backed by Sen. Warren and supported Medicare-for-All. Now he’s seeking a state senate seat.

As if to illustrate his point, minutes later Sanders, who has done more than virtually any other politician to turn support for universal Medicare into a litmus test for progressive Democratic candidates, entered the room—and was nearly trampled by selfie-seeking delegates. 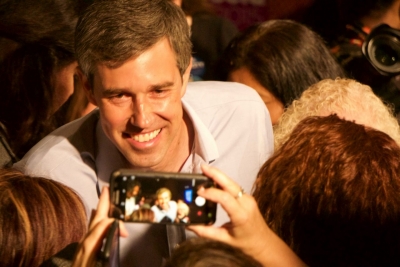 Next Beto O’Rourke, the former Texas Congressman who nearly beat GOP Sen. Ted Cruz in Texas, entered the room, unleashing fresh pandemonium. Minnesota Sen. Amy Klobuchar, a relative moderate, was treated to a much more restrained, if polite, reception.
That courtesy was not extended to Hickenlooper.
“If we want to beat Donald Trump and achieve big progressive goals, socialism is not the answer,” he told the convened Democrats. He was booed for roughly 30 seconds by delegates who either objected to his characterization of single payer healthcare as “socialism” or, in fact, believe that socialism is the answer.
Regardless, the scene was unadulterated Fox News fodder.
The next day, Delaney of Maryland took the same approach. On the heels of Sanders’ raucously well-received speech, Delaney told the audience that universal access to Medicare “is actually not good policy.” The audience disagreed, vocally and persistently. Even New York Rep. Alexandria Ocasio-Cortez got in the act, tweeting that Delaney should just “sashay away.”
If this is the first time you’ve heard of Delaney or Hickenlooper, that may have been the point. Hickenlooper later told the San Francisco Chronicle that he was not seeking the crowd’s vitriol. But the fact that his campaign blasted out a press release the day of the event with the title, “Hickenlooper to California Dems: “Socialism is Not the Answer”” suggested he might have been aiming his appeal far outside Moscone Center. The following day, his campaign issued a press release citing coverage from the Washington Post and exulting: “Hickenlooper lost the room but gained a national audience.” 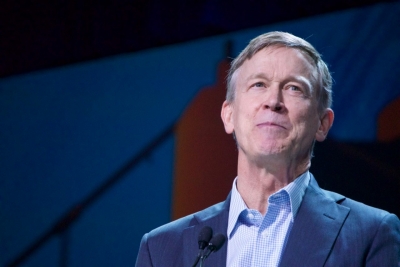 Photo, right:  Former Colorado Gov. John Hickenlooper made national news by irritating progressive California delegates. Photo by Ben Christopher for CALmatters
Besides, the Democratic Party has a history of candidates strategically saying something sure to elicit boos from a leftist crowd in order to establish their independent cred with moderates: Consider President Bill Clinton’s Sister Souljah speech, and California Sen. Dianne Feinstein’s defense of capital punishment at her state’s convention—which her campaign gleefully turned into a TV commercial.
For Julian Castro, who served as Housing and Urban Development secretary in the Obama administration and who has struggled to gain much popular support, the interpretation was clear.
“You heard the reaction,” he said, when asked by a reporter whether Democrats can compete without supporting a single payer health care policy. “Probably not in this state. Who knows?”
Joe Biden might disagree. The former vice president supports a policy that would allow those under qualifying age to purchase a Medicare policy, which constitutes a moderate position among the current Democratic candidates. But at least for now, he leads in the polls—even among California Democrats.
The Biden campaign explained the candidate’s conspicuous absence at the San Francisco convention as an unavoidable scheduling conflict, though attendees for the 2018 Democratic convention may recall the chilly reception that Sen. Feinstein, another moderate, received.
The Democrats in attendance largely shrugged off Biden’s decision not to show up. Alex Gallardo-Rooker, who has served at the party’s chair since the resignation of Eric Baumann earlier this year, said that Biden was “being pulled all over the place.” Gov. Newsom also gave the former vice president a pass: “It’s a big country.” When asked about it, Sen. Kamala Harris literally shrugged—and said nothing.
The one exception was Sanders who, during his speech in the convention hall on Sunday morning, referred to “presidential candidates who have spoken to you here in this room and those who have chosen, for whatever reason, not to be in this room.” The crowd happily booed.
Sanders was cheered as he argued that there is no “middle ground” on climate change, a not-so-subtle dig at Biden who used the term to describe his environmental policy plan.
But to some, both supporters and detractors, the party’s choice of Hicks for chair represented its own kind of middle ground. Kimberly Ellis, Hicks’ strongest opponent who narrowly lost the race for party chair in 2017, had argued that the party needs to take a more assertive role in political messaging and agenda setting. 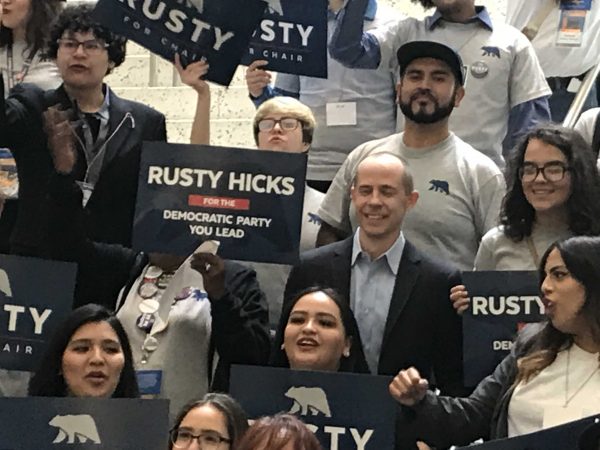 Photo, left:  Rusty Hicks, in the blue blazer, at the California Democratic Party Convention in San Francisco.
But with 57% of the vote, Hicks’ victory was decisive and the party avoided a much-predicted runoff election. Ellis got 36%.
For close observers of California politics, this might feel like deja vu. Earlier this year, the California Republican Party held its own election for chair in which Jessica Patterson, the pick of most of the party establishment, beat out an ideological upstart, Travis Allen.
At a Friday evening forum hosted by the Democratic Party’s progressive caucus, candidates for chair were asked, rapid-fire, about single-payer health insurance, a statewide ban on fracking, the Green New Deal and a moratorium on new charter schools. All six candidates were unanimous in their support.
Where disagreement arose, it was less about policy and more about the role of the party itself—whether the priority should be on building up the party as a political institution or promoting the most progressive agenda.
Asked whether the party should abandon the practice of automatically endorsing incumbent Democratic lawmakers or substantially reduce the power of elected office holders within the party, Hicks was the only candidate to say no.
Karen Araujo, a delegate from Salinas who supported Ellis, called Hicks “a safe choice.”
Still, she added, “it was a clear decision. I’ll honor that and I’ll work hard for my party.”
“It’s good to have a decisive moment where we decide, ‘okay, fair election, fair result, now let’s work on the next thing,’” said Josh Newman, a former Orange County state senator who was recalled and is running for his old seat again. “And the next thing has to be 2020.”
CALmatters is an independent public interest journalism venture covering California state politics and government.