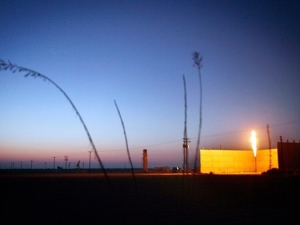 Photo: Flare burns at an oil field near Bakersfield; photo by Chris Jordan-Block/Earthjustice.

According to Patrick Sullivan with the Center for Biological Diversity, the BLM environmental assessment was inadequate.

"We think the federal government needs to go back to the drawing board and take a really hard look at fracking pollution threats to water, air and public health," he says.

The environmental lawfirm Earthjustice filed the suit on behalf of the Center for Biological Diversity and Los Padres ForestWatch. Oil companies named in the suit maintain their operations are safe and comply with all regulations.

Sullivan says fracking and oil drilling put the environment and nearby residents at risk.

"The EPA has found instances in which fracking has contaminated drinking water across the country," he says. "Here in California we know oil companies have dumped waste fluid into protected underground aquifers."

The federal lands in question stretch across the San Joaquin Valley, southern Sierra Nevada and along the Central Coast in Ventura, Santa Barbara and San Luis Obispo counties.