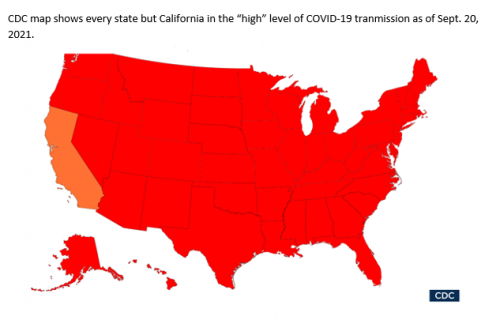 September 21, 2021 (San Diego) – California has the lowest rate of COVID-19 cases of any U.S. state, according to new data from the U.S. Centers for Disease Control – and San Diego County is faring even better. Both have high vaccination rates, a fact the CDC credits for the dramatic difference between COVID spread in California and other states.

San Diego County is faring even better, based on the latest weekly data ending September 14, with less than 34 cases per 100,000 residents.  Here, the County has released rates for vaccinated versus unvaccinated individuals – and the difference is dramatic.  The case rate is just under 14% for vaccinated people and over 59% for unvaccinated – or more than four times higher for those who didn’t get vaccinated.

In the past 30 days locally, 97.5% of hospitalizations for COVID-19 were unvaccinated people and 81% of deaths were patients who were not fully vaccinated.

The CDC praised California in a tweet, stating, “Over 70% of Californians have received at least one dose. Keep it up, California – get vaccinated.”

San Diego, which has a COVID rate only one-third of the state’s total, also has a higher vaccination rate than the state overall.  In San Diego County, 77.2% of people over age 12 are fully vaccinated and 87.1% are partially vaccinated.

California has mandated vaccines for healthcare workers, teachers and some other groups and offered numerous incentives to encourage people to get the jab.

In addition to vaccines, California has taken many other steps to curb the spread of COVID-19 such as mask mandates for large indoor gatherings, in schools, healthcare settings and public transit, among other places. The state is also requiring proof of vaccination or a negative COVID test at some venues, such as large indoor events, as well as encouraging social distancing and more.

Governor Gavin Newsom, who survived a recall attempt this month by a two-to-one margin, has credited his win as a mandate from voters who support his actions to boost vaccination rates, mandate mask wearing and more.

ABC 10 News/San Diego Union Tribune found that statewide, two-thirds (66%) would support a mask mandate for everyone, regardless of vaccination status – an even stronger mandate than current law requires.  Just 25% oppose this, with 9% not sure. Over half (51%) say they wear a mask indoors in public all the time and 19% do so most of the time.

Across California, 57% believe employers should have the right to ask workers to get vaccinated, while 30% opposed and 13% were unsure.  More than half, 52%, said businesses should be able to deny service to unvaccinated customers, while 35% opposed.

Over half, 51%, believe California should require everyone to get vaccinated who can do so, though 39% opposed and 11% were unsure. Most also voiced concerns over the fast-spreading Delta variant.

Those polled also voiced their feelings toward people who refuse to get vaccinated, with 42% expressing frustration and 14% feeling angry; only 22% felt understanding with the rest indifferent or unsure. Nearly half (46%) said they have gone out of their way to avoid friends or colleagues who aren’t vaccinated and 66% want to see more effort to convince unvaccinated people to get the vaccine. Two-thirds of those polled are fully vaccinated and 8% are partially vaccinated, responders told pollsters.

and yet so many hate it here! it is time for the haters and the anti-vaxxers to MOVE OUT!!! go to texas or some other right wing state. do not let the door hit you on the way out!!!!