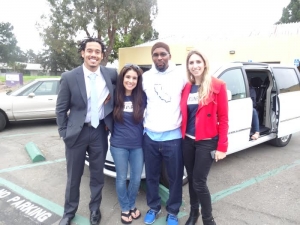 October 12, 2014 (San Francisco)-- Roeling Adams walked out of San Quentin State Prison a free man on October 10th after he spent 28 years in prison for a crime he did not commit.

Adams was wrongfully convicted of a shooting in 1986. He provided an alibi at trial and has always maintained his innocence. In an effort to protect the true culprits, the main prosecution witness testified Adams was responsible. This witness later recanted and identified the true perpetrators.

"One of the leading causes of wrongful conviction is misidentification,” says Justin Brooks, Director of the California Innocence Project. "I am so pleased that Roeling finally has his freedom after 28 years of wrongful incarceration."

After the main prosecution witness recanted, the California Innocence Project, with the help of parole attorney Jeffrey Taft, helped secure Adams’ freedom through the parole process. Adams will move into transitional housing to ease him back into society.

About the California Innocence Project

The California Innocence Project is a California Western School of Law in San Diego clinical program dedicated to the release of wrongfully convicted inmates and providing an outstanding educational experience for students enrolled in the clinic. The California Innocence Project receives approximately 2,000 claims from inmates each year and has earned the exoneration of 11 wrongfully convicted clients since its inception.

Celebrating its 90th anniversary in 2014, California Western School of Law is the independent, ABA/AALS-accredited San Diego law school that prepares graduates for the practice of law through a carefully sequenced program of study combining traditional legal theory with hands-on learning in real and simulated client environments.