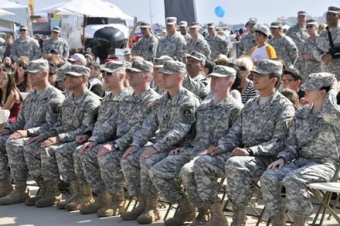 March 20, 2019 (San Diego) -- Instead of putting up razor wire at the border, California’s National Guard troops will soon be wielding shovels, rakes and chainsaws to clear brush, thin trees and help prevent the spread of wildfires.

The troops will receive 11 days of training in April, then be dispatched across the state in hopes of preventing future disasters such as the Paradise Fire, which killed over 80 people and destroyed the town of Paradise in northern California last year.

It’s not the first time the National Guard has been used for fire protection.  Thousands of National Guard troops battled fires across the western United States last year, including here in California.

Back in 2008, Governor Arnold Schwarzenegger called in National Guard troops to help battle hundreds of fires sparked by lightning.

Mohler indicated crews would be trained in forest management to avoid over-thinning of chaparral and trees. The state estimates that over 23,000 square miles of forests need thinning or restoration, but only 140 square miles of projects are thus far planned. The Forest Service has reported millions of dead trees in California after several years of drought.

But some environmentalists voice concerns.  Shaye Wolf, a scientist with the Center for Biological Diversity, says, “Cal-Fire is taking the Trump approach, logging the forest and weakening critical environmental protections, and that’s the exact opposite of what we need to be doing.”

Some ecologists say that overthinning of forests and chaparral can lead to increased growth of grasses, which burn hotter and faster, fueling megafires.

Fire Prevention is a good thing, however "firing out and brush removal is controversial at best. This smacks of our new Governor pulling them from the border to promote his "sanctuary state and open border ideology". My opinion of the purpose of National Guard is just that!