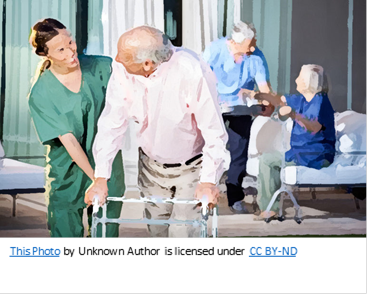 April 1, 2020 (San Diego) -- After weeks of warning Californians about the deadly threat the coronavirus poses to nursing home residents, the State of California on March 30th ordered California nursing home operators to bring the virus into their facilities, “knowing full well it is likely to kill many residents,” says Michael Dark, staff attorney at California Advocates for Nursing Home Reform (CANHR).

In an interview with ECM, Dark, said the California Association for Long Term Care Medicine, a physicians’ organization, has also adopted an emergency resolution opposing the move.

“I think that there will be litigation if the state doesn’t rapidly clarify its position,” he told ECM, “ because it’s putting grave danger.”

The order came after some nursing home residents admitted to hospitals for treatment of COVID-19 or other conditions were later refused readmission to nursing homes upon discharge from hospitals, leaving them potentially with no place to go amid the pandemic.
The March 30, 2020 directive from the California Department of Public Health to skilled nursing facilities states: “SNFs shall not refuse to admit or readmit a resident based on their status as a suspected or confirmed COVID-19 case. SNFs shall institute appropriate precautions to prevent the spread of infection to health care personnel and other residents,” the order continues.

California issued its directive while coronavirus outbreaks are spiking in dozens of nursing homes throughout the state, yet the state is refusing to identify nursing homes with outbreaks, leaving residents to worry that they are at immediate risk of infection and death.

Dr. Karl Steinberg, a nursing home and hospice medical director in San Diego’s North County, called the order reckless in an interview with KPBS.  “What responsible healthcare provider would willingly put somebody who has this deadly, contagious illness into a place where it doesn’t already exist?" he asked. "To me, that’s essentially being an accessory to homicide.”

He adds, “We know this is a virus that targets the elderly and the seriously ill and that is the population in a skilled nursing home.”

COVID-19 outbreaks in Europe, the state of Washington and elsewhere have swept through nursing homes, infecting and killing large numbers of residents. The New York Times reports today that nursing homes account for one in four coronavirus deaths in New York City.
“Sacrificing the lives of beloved nursing home residents is beyond unconscionable,” said Patricia McGinnis, CANHR’s executive director. “California’s directive is nothing less than a death sentence for countless residents. The State should instead look to alternative locations such as hotels and conference centers as much safer places to send COVID-19 patients for care.”

The state is talking about taking people well enough to be on their own out of hospitals, who could be sent to a hotel or conference center as New York and South Korea have done, instead of sending them to nursing homes.

The California directive further endangers residents by waiving both minimum staffing requirements and occupancy limits for skilled nursing facilities. Cramming infected patients into crowded, understaffed facilities with extraordinarily vulnerable residents is a recipe for disaster, states a press released issued by CANHR.
By any measure, California nursing homes are unprepared for this pandemic. There are shortages of personal protective equipment (PPE). Nursing homes are more understaffed than ever as caregivers stay home because they are ill with the virus or caring for out-of-school children.

Routine inspections and investigations of nursing homes have been cancelled during the pandemic, leaving them essentially unregulated. Most inspectors have been reassigned to desk duties. Ombudsmen are locked out of facilities as are family members, friends and other visitors who might at other times sound the alarm when residents are neglected.

“There are no witnesses to the suffering residents are enduring as they get sick and die alone,” CANHR’s release states.  “The lives of people in California’s nursing homes are as precious as any other. It is time for California to start treating them accordingly during this pandemic. CANHR calls on Governor Newsom to reverse the CDPH directive today before more harm is done and more lives are lost.”