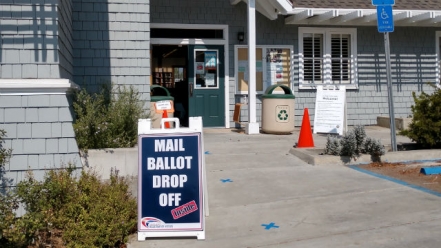 Secretary of State Alex Padilla told a virtual press conference that reports of the unauthorized boxes were received over the weekend in the three counties.

“These boxes are not the same as county elections drop boxes that are required to meet state security standards,” said Padilla. “Unofficial, unauthorized ballot boxes are not permitted by state laws.”

Atty. Gen. Xavier Becerra said the cease and desist orders were sent to individual members of both the statewide and county Republican parties.

He warned that “tampering with the vote is illegal” and those who do so are subject to prosecution.

“In California, where you can have convicted felons and individuals with a criminal history go door-to-door and collect ballots from voters, Democrats are now upset because organizations, individuals and groups are offering an opportunity for their friends, family, and patrons to drop off their ballot with someone they know and trust,” the party said.

Padilla said that while California allows a third party to collect ballots, the person doing the collection must sign official documentation.

In the case of unauthorized drop boxes, voters “do not know who it is they’re surrendering their ballot to.”

He urged voters to confirm drop-off locations by checking the state voting website.

When have we ever had partisan drop-off voting boxes? The GOP flatly refuses to cease and desist. Apparently anyone who wants to set up a box is OK with them. Of course, who would suspect the GOP of rigging the ballots just because they love voter suppression. Some Republican controlled states have limited collection boxes to make it harder for residents in the widespread rural communities to get their ballot in. Then there's the proven dropping of names off the voting list. Just more dirty tricks by the party of dirty tricks. Besides, everyone knows Republicans think they are above the law. More proof of this. Not all Republicans are like this, but the ones in today's politics are. They are scared because they're being called on their BS. They are scared to offend Donald Trump because he is known as a vicious person who takes revenge out on those who defy him. This fake ballot box ploy is just one more attempt by a party of old white men threatened with extinction. Sad, but today's politics.