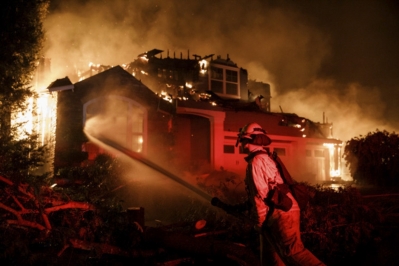 Photo:  A firefighter hoses down a burning home to help stop the spread of the fire to nearby homes in the Skyhawk community as the Shady Fire burns in Santa Rosa, on Sept. 28, 2020. Photo by Dai Sugano, Bay Area News Group

November 12, 2020 (Sacramento) - As this year’s historic wildfire season winds down, Californians living in fire-prone territory got temporary relief from another threat: they can’t lose their homeowners’ insurance policies for another year.

Premiums and nonrenewal rates have skyrocketed in California’s fire-prone regions since 2015 as companies are loath to pay for damages wreaked by the state’s increasingly devastating fires. This year, more than four million acres have burned, twice the state’s previous modern-day record. The moratorium, enacted by Insurance Commissioner Ricardo Lara, will give 2.1 million homeowners in the vicinity of those blazes — 18 percent of all policyholders in the state — another year to find a new insurance company or take steps to mitigate fire risk on their property and convince their insurer to extend coverage.
In 2019, insurers dropped 235,274 policies in California, a 61% increase from 2018, according to data Lara’s office released in December. Sixty-five percent of those came in areas of moderate to high fire risk, and the state’s 10 most fire-prone counties saw a 203% increase in nonrenewals.
Many of those customers have turned to the state’s last resort: the California FAIR Plan, a state-run pool that provides bare-bones fire coverage to customers who can’t find another insurer. Enrollments in the FAIR Plan jumped 225% last year.
In 2018, Lara, then a state senator, crafted a law that insurers must wait one year before dropping a policyholder in an area scorched by fire, and two years if the policyholder’s home was destroyed.
Last December, he used that law to impose a one-year moratorium against nonrenewals in 180 zip codes identified by state fire officials as having been directly impacted by fires in 2019. The new moratorium will cover 477 zip codes, more than twice as many as the previous one.
The 2019 moratorium, which covered more than one million Californians, will expire Dec. 5, though 364,000 of those residents live in areas that overlap with the new moratorium announced Thursday.
There won’t be a sudden, massive number of people getting dropped from their policies on Dec. 6, said Michael Soller, a spokesperson for Lara’s office. Insurers covering homeowners protected by the previous moratorium but not the new one can drop those policies on the date they started. So if you got a policy in March 2018, the insurer can’t opt out on Dec. 6, they have to wait until March 2021, for example.
The new moratorium aligns with Gov. Gavin Newsom’s emergency declarations of Aug. 18, Sept. 6, Sept. 10, and Sept. 28, protecting homeowners within the zip codes affected by those fires for a year from that date.
Amy Bach, who founded the national consumer advocacy group United Policyholders in 1991, said in an interview last month that the current conditions for buying homeowners’ insurance in California may be the worst she’s ever seen.
Some Californians in fire-prone areas who haven’t been dropped are paying three to four times the premiums they did before 2015, she said. Bach said the one-year moratoriums are helpful, but said long-term solutions are needed to protect homeowners in areas that haven’t burned in the previous year or two.
No matter the work they do to mitigate fire risk on their property, many residents in those regions are now seeing cancellations because they’re considered too high-risk given how far California’s fires have spread. One example is Santa Barbara, the site of the 2017 Thomas Fire, Bach said.
“That’s the kind of place that I would expect insurers to have really pulled back because even though there hasn’t been a fire there in a couple years, I think they have concerns that there could be another one,” she said. “Even though there hasn’t been a wildfire in the Oakland Hills since ’91, I think it remains on the list of areas that some insurers are disinclined to serve.”
Insurers say the market in some fire-prone regions simply isn’t sustainable and they’re facing their own challenges paying up to reinsurers, the companies that insure the insurance companies.
In 2017, homeowners insurers paid out $2.01 in claims for every $1 in premiums they collected, according to state data. In 2018, they paid $1.70 for every $1 in premiums. That added up: claims from those two seasons alone totaled $24 billion, although Pacific Gas and Electric assumed responsibility for roughly $11 billion of those losses.
The 2017 fires “almost completely wiped out” the industry’s profits in California from 2001 to 2016, according to a RAND Corporation report last year.
The insurance department and consumer advocates like Bach both say the ultimate solution lies in insurance companies incentivizing homeowners to “harden” their homes against wildfires by making improvements like installing a metal roof or cutting back brush to leave space around the home.
Bach and Lara backed a bill this year, AB 2367, that would have required insurers to renew policies for homeowners that met state-standards for home hardening, but it died in committee after strong opposition from insurers.
Insurance industry representatives said they agree fire mitigation measures are key to solving the issue in the long term, but argued that they need more science to better gauge how much specific mitigation measures reduce risk, as well as more flexibility in rate regulation, before they are able to partner in the home hardening measures.
“We are, of course, as interested in mitigation as anyone because we do see homes saved by having done mitigation,” said Janet Ruiz, communications director at the Insurance Information Institute, a trade group. “The science is just getting to the point where they’re identifying what things really make a difference.”
In the meantime, customers like Jaimi Jansen, who lives in Bonny Doon, will likely continue to face rising premiums and the risk of nonrenewal.
When Jansen moved to the area north of Santa Cruz two years ago, her home’s previous insurer refused to extend coverage, and the company she went to afterward dropped her in March.
Now on her third insurance company, she’s paying 70 percent more than she did last year. Bonny Doon is covered by the 2020 moratorium, but the cost has left Jansen wondering whether it’s worth staying in California at all.
“It’s going to cause people like me to leave the state,” she said. “If we can’t afford to live here because if our house burns down we can’t rebuild, what are we doing then?”