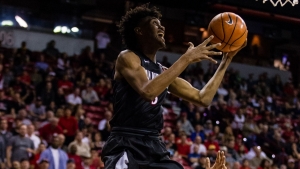 The Bears (3-5) ended a two-game losing streak and beat San Diego State (5-4) for the second straight time. Last season they upset the Aztecs 63-62 in San Diego on Dec. 9, 2017.
Grant Anticevich had 13 points and six rebounds, both career highs, for Cal. Darius McNeill added 13 points, and Matt Bradley had 11.
Jalen McDaniels scored 20 points for the Aztecs. Jeremy Hemsley scored 19 points and moved from 22nd into a tie for 18th on San Diego's all-time scoring list with 1,188 points. Jordan Schakel scored 14 and Devin Watson scored 13.
It was 68-all with 7:52 to play, but the Aztecs went on a 10-3 run to build a 78-71 lead with 3:57 left. But Cal roared back to build an 83-80 edge with 1:11 left as Austin hit a 3-point shot and Andre Kelly scored from inside.
San Diego State tied it 83-83 on Schakel's 3-pointer with 45.5 seconds left, but Bradley drilled a 3 with 25 seconds left, putting Cal up 86-83.
BIG PICTURE
San Diego State: The Aztecs shot 57.1 percent from 3-point range but managed to lose a second straight game for the first time this season.
California: The Bears, who were coming off a 79-60 loss at home to San Francisco on Wednesday, avoided their first three-game losing streak of the season.
UP NEXT
The Aztecs return home to face Cal State Dominguez Hills, a Division II team, at Viejas Arena on Wednesday.