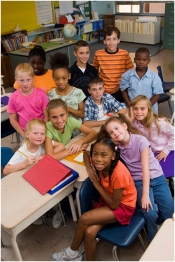 May 27, 2011 (Washington D.C.) -- Following $20 billion in state budget cuts to education in the past three years, California today learned that the state will receive partial relief from the U.S. government.

U.S. Secretary of Education Arne Duncan today announced that California will receive $69 million to turn around its persistently lowest achieving schools through the School Improvement Grants (SIG) program.  But districts will have to agree to drastic changes in order to apply for grant funding--such as replacing principals and many teachers, converting to a charter or to be run by a for-profit management education organization, or shutting down and sending kids to tother schools.

"When a school continues to perform in the bottom five percent of the state and isn't showing signs of progress or has graduation rates below 60 percent over a number of years, something dramatic needs to be done," said Duncan. "Turning around our worst performing schools is difficult for everyone but it is critical that we show the courage to do the right thing by kids."

The $69 million made available to California is being distributed by formula to the state and will then be competed out by the state to school districts. School districts will apply to the state for the funds this spring. When a school district applies, it must indicate that it will implement one of four school intervention models in each of its persistently lowest-achieving schools for which it receives SIG funds, based on school needs:

• TURNAROUND MODEL: Replace the principal, screen existing school staff, and rehire no more than half the teachers; adopt a new governance structure; and improve the school through curriculum reform, professional development, extending learning time, and other strategies.

• RESTART MODEL: Convert a school or close it and re-open it as a charter school or under an education management organization.

• SCHOOL CLOSURE: Close the school and send the students to higher-achieving schools in the district.