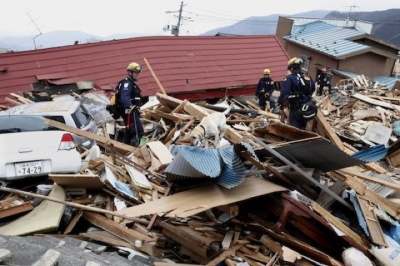 March 15, 2011 (San Diego) –Twelve search dog teams, including six from California and six from Virginia, are now on the ground in Japan searching for survivors. “It’s a very warm story. These were all shelter dogs,” Janet Reineck of the National Search Dog Foundation in Ojai, California, told East County Magazine.

Now the rescued dogs help rescue humans following some of the most devastating disasters in history.

Along with their handlers, who are all firefighters, some of the dogs now in Japan have previously assisted in other major disasters.  But Japan, struck by both a 9.0 earthquake and a tsunami, poses even more daunting challenges. “One of our people said this is like a cross between 9-11 and Katrina,” Reineck said, recalling the terrorist bombing in New York and the hurricane/flooding that devastated New Orleans.

Reineck emphasized that these canines are not cadaver dogs and that hope remains that the dogs will locate survivors amid debris on an almost unimaginable scale in Japan.

Half of the team is now in Ofunato City on the northeast coast of Japan; the rest are assisting with logistics and equipment prep at the Misawa Air Base.

It rained Tuesday, snowed all night, and is still snowing. Space heaters in the gym are helping to keep the Task Force personnel and the dogs warm when they’re not out searching. We are ‘delayering’ an area—Task Force members remove a layer of debris after it is searched and then we work the next layer.

We are divided into groups. Hunter and Joe are out searching now. When they finish, Cadillac, Baxter, and Riley will take their place. Pearl is resting today. The devastation from the tsunami is just unbelievable. The dogs are searching well and all their training has definitely paid off.

The job of our Search Dogs is to find live victims, conscious or unconscious, in the debris left by the earthquake and tsunami. All rescue personnel will be awaiting a “Bark Alert” from the dogs, letting them know there is someone in need of rescue. Equally important is the dogs’ ability to “clear” an area, i.e. determine that there is no one alive in the wreckage, and the rescue crews can move on to the next site. Everything the teams have learned during their intensive training will be put to use in saving lives.

Update March 17, 2011:  The members of Los Angeles County Task Force 2 (and VA-TF1) are 119 miles north of Fukushima, scene of the unfolding nuclear crisis, Debra Tosch, executive of the National Disaster Search Dog Foundation has informed ECM via e-mail this morning.

"The task force is in constant touch with the Govt of Japan and USAID to constantly be abreast of the situation. In addition, the task force has equipment that constantly monitors the radiation levels to keep our teams safe. Every team member has been trained to work in this environment, have training with the equipment and know where they can and cannot go."

She added, "I have complete confidence that all of the task force members will come home safely; two legged and four legged!"