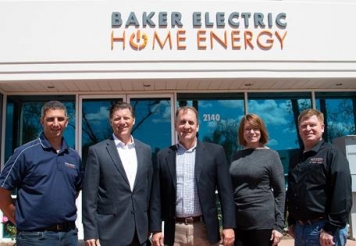 Following President Mike Teresso’s presentation describing Baker’s 80 years of history, market and portfolio of products and services, Senator Jones was given a tour of the Escondido offices and extensive warehouse.  Baker, ranked #1 in market share in the Southern California service area, has installed over 10,000 residential solar systems. Senator Jones learned about the strategy behind Baker’s impressive growth, their diversification and their upcoming April 2019 move to a new facility intended to house their growing workforce.

At the conclusion of the tour Senator Jones said, “Baker’s impressive operations, 223 employees and growing market share have made them one of the most significant local, family-owned businesses in North County.  Their solar and home battery systems are helping homeowners in San Diego, western Riverside and southern Orange Counties save on their electricity costs and chart their energy independence.”

“We were honored to share the Baker success story and our company operations with Senator Jones.  He has a clear appreciation for the importance of renewable energy to Southern California homeowners and its growing significance to our local job market and the state’s economy,” commented Teresso.

Built on 80 years of electrical contracting expertise, San Diego-based Baker Electric Home Energy has provided home energy solutions to more than 10,000 customers throughout Southern California. Baker Home Energy designs, engineers and installs solar power systems and home batteries for residences across Southern California. Additionally, the company provides full heating and air conditioning services and smart home solutions. The company is a BBB accredited business with an A+ rating and has been the winner or finalist of the BBB Torch Award for Ethics in the 100-499 employee category four consecutive years (2014 - 2018). In addition, Baker has received the 2017 BBB’s coveted International Torch Award in 2017.  Baker has also been ranked by the San Diego Business Journal as its No. 31 Fastest-Growing Private Company and has earned Angie’s List Super Service Award four times (2013–2016).

Information on Baker Electric Home Energy can be found at https://BakerHomeEnergy.com.