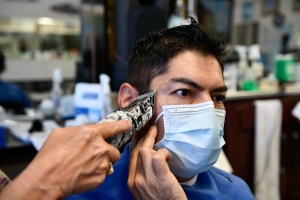 Photo:  Carlos Hernandez holds his mask while getting a haircut by Sarah Cordiey at Spiros Barber Shop in Long Beach on June 9, 2021. "During the pandemic, I got depression and anxiety," said Hernandez, who saw his family for the first time last week in more than one year. "But then when I got [fully] vaccinated I felt a lot better." Photo by Pablo Unzueta for CalMatters

If all goes as expected and promised, on June 15 our 15-month-long ordeal of public health restrictions, mandates, bans and color-coded tiers to stem the COVID-19 pandemic will finally come to an end. As Gov. Gavin Newsom said in April and reaffirmed in May, tomorrow is when “we can start to open up…business as usual.”

But as that much-touted date approaches, the governor’s promise of a sudden milestone is colliding with the loophole-ridden gradualism of California labor law, local control and the imperatives of fighting a diminishing — but not defeated — virus that has killed 62,500 Californians and counting. 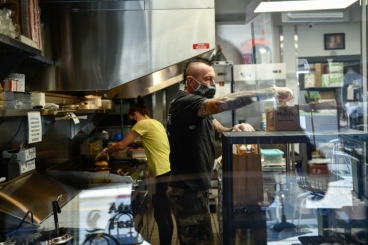 Photo, right:  Alex Armstrong, 51 and his wife, Paula Armstrong, 45, prepare pick up orders during lunch hour at their Long Beach restaurant, VBurger, on June 8, 2021. “It’s been very challenging for us, but we couldn’t back out,” said Armstrong of opening mid-pandemic last year. Photo by Pablo Unzueta for CalMatters
What about the state Capitol?
The halls of state government will be reopening on June 15, too. But befitting a deliberative body, it’ll be doing so at a slower pace.
Starting on Tuesday, the building will be open to a maximum of 500 members of the public. Masks will still be required and social distancing guidelines will still be in effect. After that, the rules committees in both the Assembly and Senate will “continue to assess increasing capacity to a total of 1,000 members of the public as soon as the week of June 21st,” according to a statement released Friday by legislative leaders.
Since the beginning of the pandemic, lobbyists, reporters and the general public have been permitted to enter the Capitol only under very limited and supervised conditions.
Is the state still going to be in a state of emergency?
Yes.
Does that mean the state isn’t actually going to reopen?
No.
When the governor was asked on Friday whether, come June 15, he would also rescind the state of emergency proclamation that he issued in the early days of the pandemic in March 2020, Newsom — to the surprise of many and dismay of some — said that he would not.
So how can the state possibly reopen for “business as usual” when it’s simultaneously under an emergency?
The answer might be that the definition of “state of emergency” under California law doesn’t necessarily mean “emergency” in the everyday “something is on fire” sense of the word.
While the California Emergency Services Act does give the governor exceptionally broad powers to govern by fiat during a period of crisis, in practice the governor has evoked that power during the pandemic to administer various public health and economic relief programs and to collect federal aid.
“Abruptly terminating the emergency would cancel all that wholesale,” said Brandon Stracener, research fellow at the California Constitution Center at UC Berkeley. “A gradual transition process that involves the Legislature is far better, and permits a rapid response to any unexpected surge in the pandemic.”
With executive orders empowered by the proclamation, Newsom has loosened regulations to allow more people to administer vaccines, banned water shut-offs on homes with delinquent utility bills, given cities the ability to freeze commercial evictions, allowed local governments and courts to conduct public hearings over Zoom and given businesses on state roads the freedom to set up parklets and other street-side services. 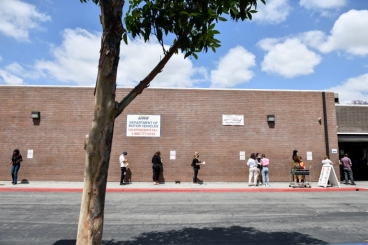 Photo, left:  people wait in line outside of the state Department of Motor Vehicles offices in Bellflower, on June 8, 2021. Photo by Pablo Unzueta for CalMatters
The governor is hoping to extend some of the programs long past June 15 — either as long as the effects of the pandemic coursing through the state, or until the Legislature can make it permanent by statute.
On June 2, for example, the governor’s office assured local governments that they would still be allowed to hold meetings remotely. “The Governor recognizes,” cabinet secretary Ana Matosantos wrote in an open letter, “the importance of an orderly return to the ordinary conduct of public meetings of state and local agencies and boards.”
Some local governments are deciding to return somewhat to normal; San Francisco Mayor London Breed presided over four weddings at City Hall to mark its reopening Monday.
Republicans in the Legislature have long bristled at the governor’s unprecedented use of executive power during the pandemic, and are now attacking him leading up to an all-but-certain recall election this fall. On Monday, Assemblymembers Kevin Kiley of Rocklin and James Gallagher of Yuba City and state Sen. Melissa Melendez from Riverside County demanded that the administration explain what justified the continued proclamation of the emergency.
Some emergencies from recent wildfires and past droughts are still active, Newsom’s office notes. State law does give the Legislature the ultimate check on the governor’s emergency powers. All they need to do is pass a resolution declaring the emergency to be over. But they haven’t. And with Democrats enjoying supermajorities in both the Assembly and Senate, they aren’t likely to anytime soon.