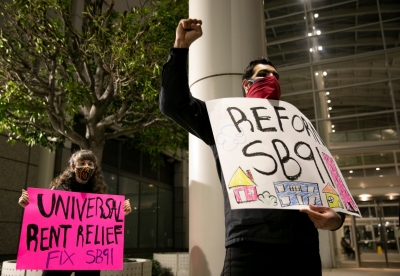 Photo:  Oakland resident Alex Acuña holds up a sign decrying a rent relief plan during a vigil at the Elihu M. Harris, State of California office building in Oakland on Jan. 29, 2021. Photo by Anne Wernikoff. CalMatters

June 28, 2021 (San Diego) - California renters, who are still struggling to pay the rent even as the pandemic wanes, will be shielded from eviction through Sept. 30, under a last-minute deal announced June 25 by Gov. Gavin Newsom and legislative leaders.

The agreement, which more fully opens up $5.2 billion to pay full back rent and rent going forward, was approved Monday by the Assembly and state Senate. Newsom said he is eager to sign the bill before the existing protections expire after Wednesday, June 30.

In statements, Newsom and legislative leaders who negotiated the new protections said they would keep families from falling through the safety net as California reopens from COVID-19 and the economy recovers. “This proposal avoids a massive eviction cliff, allowing us to keep tenants in their homes and get landlords the financial support they need,” said Assembly Housing Chairperson David Chiu, a San Francisco Democrat who put together the initial moratorium.
Some tenant groups, however, wanted a longer extension of the eviction ban, saying that three months isn’t long enough to get rent relief distributed. “This timeline does not match the reality the state faces and tenants will be left out to dry,” Francisco Dueñas, executive director of Housing Now!, said in a statement.
Assembly Speaker Anthony Rendon, a Lakewood Democrat, told CalMatters that lawmakers couldn’t guarantee they would get rental relief to everyone by Sept. 30, “but we do want to do everything we possibly can.”
He said the Legislature would reassess the program as the end date draws closer. “We’re trying to implement new processes and protections, and we’re hoping that those will be effective,” he said. “And we’re also obviously hoping that the economy is in full swing and hopefully an eviction moratorium will not be necessary moving forward.”
While advocacy groups representing tenants and landlords said they were shut out of the negotiations — similar to the last two rounds of negotiations — both sides managed to get some key provisions they wanted. Here are some key components of Assembly Bill 832:
What would this mean for tenants?
Tenants would have a defense in court should their landlord evict them over non-payment of rent through Sept. 30. They still have to submit a declaration saying they are unable to make full rent, and pay at least 25% of their monthly rent between Sept. 1, 2020 and June 2021, or in bulk, by Sept. 30, to avoid eviction.
“If you are served with a 15-day notice and do not provide the declaration form to your landlord before the 15-day notice expires, you could be evicted,” the bill says.
Additional documentation, such as a bank statement proving a decrease in income, could be required in cases where a landlord has proof the tenant makes over a certain income.
Tenants will still need to abide by their lease in order to avoid eviction for reasons other than non-payment of rent.
Evictions over non-payment of rent could resume on Oct. 1, but people who make less than 80% of the area median income and were financially affected by COVID would have another six months to apply for rental assistance funds.
If the rent relief application goes through, the eviction process will be blocked, and landlords will be able to receive compensation for missed back rent. If the tenant is ineligible, however, the proceeding will continue.
Lupe Arreola, executive director of Tenants Together, said while the additional legal protections sound good in theory, they may not work in real life. “We’re saying that’s wishful thinking. We’re saying that’s not going to happen.” 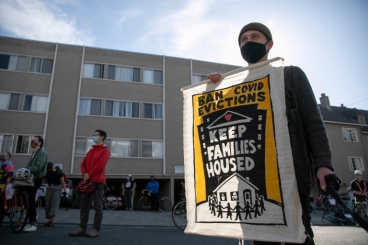 Photo, right:  Oakland resident Andrew Rosenburg holds up a banner while protesting rent evictions during the pandemic on Dec. 5, 2020 in Oakland. Photo by Anne Wernikoff, CalMatters
So what about the money? The bill says tenants, as well as their landlords, will be able to apply for 100% of back rent and up to three months of forward rent. Previously, without landlord approval, a tenant was eligible for only 25% of missed rental payments.
That was a key ask from tenant advocates, and a source of worry for landlords, who said the provision would be abused. Tenants who receive rental assistance will acknowledge under penalty of perjury they will use the money to pay missed rent.
If the landlord still tries to evict the tenant over non-payment of rent, the court will be able to check whether the tenant received state dollars. If they paid the full amount to the landlord, the eviction will be blocked.
The bill also shields evictions over non-payment of rent from appearing on a tenant’s record, which hampers the ability to rent in the future.
Who is eligible for relief?
The tenant’s household income must be at or below 80% of the area median income during 2020 or 2021. Those income brackets vary by region. Tenants with an income below 50% will be prioritized. Assistance is available to tenants regardless of their immigration status.
Local jurisdictions distributing rental relief might have different rules, however; during the last round of funds in Los Angeles, for example, a two-person household couldn’t make more than $45,050.
The bill expands eligibility to tenants who may have moved out of their home during the pandemic who were not covered previously. They can now apply for back rent owed to a previous landlord.
What does this deal mean for landlords?
Landlords will be unable to evict tenants over non-payment of rent through Sept. 30. To file an eviction lawsuit after that, the landlord must provide evidence to the court they applied for rental assistance. The case can only proceed if the tenant does not complete their application or qualify for aid.
Landlord groups, which hoped the protections would not be further extended, are frustrated by this provision.
"While there is some recognition of this distress in the deal by providing 100% in rent assistance and requirements for the tenants to use the funds to pay rent, we are very concerned as to when this moratorium will actually end,” Christine LaMarca, president of the California Rental Housing Association, which represents more than 20,000 landlords, said in a statement.
Landlords will still be able to evict tenants for a substantial remodel only if that is necessary to comply with health and safety standards, and if the owner of the property is selling it to a buyer who intends to occupy the property. They cannot, for example, sell to someone who intends to rent out the place.
Those restrictions might be tighter in certain localities, like Los Angeles, which passed a local moratorium earlier this week. But under the bill, other cities would not be able to enact stricter rules through March 2022, a provision supported by the California Apartment Association.
Landlords would be able to apply for 100% of back and forward rent. The previous law said a landlord could apply for 80% of missed rent payments and would have to forgive the remaining 20%; the new bill means that even those who applied for only partial refund will be receiving the missing funds.
If both a landlord and a tenant applied for funds, the money will go directly to the landlord. It will only go to the tenant if the landlord declines to participate in the program.
But the California Apartment Association said the state’s moratorium extension, and the final federal extension through July announced Thursday, would not be necessary if the rent relief money was getting out to landlords and tenants.
“It is frustrating that the state of California and numerous local governments have not quickly disbursed funds to those in need, especially to mom-and-pop rental housing providers who have not seen any rent payments yet must still pay the mortgage, insurance, taxes, maintenance and other expenses,” association President Tom Bannon said in a statement.
What about the money?
The protections are tied to dollars; and lots of them. The state approved an additional $2.6 billion of rental assistance, plus an existing $2.6 billion, all from federal relief funding. That’s $5.2 billion available to cover the missed back rent and up to three months of forward rent.
An analysis by PolicyLink, an Oakland-based research group, suggests that about 758,000 households in California are behind on rent and owe a total of $3.5 billion.
That money has gone out at a snail’s pace. While billions have been available since January, the state has distributed from its pot only $61.6 million in relief to a little more than 5,000 households so far.
“The linchpin in all of this is the billions of dollars we have from the federal government,” Brian Augusta, legislative advocate for the California Rural Legal Assistance Foundation, told CalMatters. “We have got to urgently fix whatever has slowed the flow of that money to a trickle.”
Several cities, including Los Angeles and San Francisco, have reported demand for rental assistance far outweighed availability. The bill says that unspent funds will be redirected to those places with the highest need.
The bill also grants larger cities and counties the ability to administer their own rental funds, instead of having to rely on the state to administer a portion of those. That was a major request from local governments.
CalMatters is a public interest journalism venture committed to explaining how California’s state Capitol works and why it matters