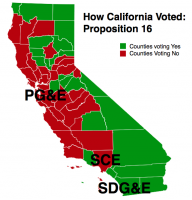 Reprinted with permission from:

May 18, 2014 (Sacramento)--A member of the International Brotherhood of Electrical Workers Local 1245, Hunter Stern, recently sent Southern California residents an email supporting state Assembly Bill 2145, popularly called the “Monopoly Protection Act.” According to the PACIFIC SUN, it is filled with “filled with misinformation” – but the real problem is that it may evade a California law meant to create transparency in the market place. After PG&E spent $46 million trying to introduce legislation that might have stopped Marin Clean Power from launching, in 2010, a law was passed against the state’s utilities from using ratepayer funds to pay for marketing campaigns against communities that attempt to set up their own utilities (community choice aggregates, or CCA). Utilities have to file a plan with the California Public Utilities Commission, before launching anti-community choice advertising. Unfortunately, this legislation does not extend to the use of use third-party intermediaries. Mr Stern’s email carried a link to an organization called the Marin County Common Sense Coalition, an organization with known ties to PG&E. This is starting to sound like a rerun. Is California’s Monopoly Protection Act a resurrection of Prop. 16?

Most of the state’s electricity has been provided by three investor owned utilities – San Diego Gas & Electric (SDG&E), Southern California Edison (SCE) and Pacific Gas & Electric (PG&E) – who exercise a monopoly within their respective territories. Though state legislation allowing communities to set up their own utilities was passed in 2002, the first extant community choice provider did not go online until 2010.

PG&E appears to have tried to stop this by sponsoring a measure on that year’s ballot (Proposition 16) that would have required a 2/3 majority vote in order for communities to form their own utilities.

Some of Marin County Common Sense Coalition’s mailers, in support of Proposition 16, said “This information was provided by Coalition for Reliable and Affordable Electricity, a coalition that includes Pacific Gas and Electric Co.”

The emcee at one of their meetings, former San Rafael Assemblyman Joe Nation, confirmed that the Common Sense Coalition and the Coalition for Reliable and Affordable Electricity were the same organization.

Dan Richard, President of the Coalition for Reliable and Affordable Electricity, was a former PG&E Vice President.

One of the Coalition’s Directors, Nancy McFadden, was a senior vice president and senior adviser to PG&E’s CEO Peter Darbee.

Proposition 16 was voted down by 52.5% of California’s electorate, the deciding factor being the ridings in PG&E’s territory.

Had Proposition 16 passed, it would have been more difficult for California’s first community choice provider, Marin Clean Energy, to go online.

Up until now, local governments that wished to form a community choice aggregate could count on enrolling the residents of their districts. They had the option of opting out and staying with their old utility.

Bradford is a former employee of Southern California Edison and was the keynote speaker at PG&E’s 2013 annual supplier diversity awards. In 2010 California Watch wrote PG&E “wined and dined state legislators (most recently Assemblymen Felipe Fuentes and Steve Bradford). Maplight lists Bradford as the #1 Assembly recipient of contributions from the utility sector in 2011 and 2012. He is also the Chairman of the Assembly Committee on Utilities and Commerce.

His bill, AB 2145, makes it necessary for every would-be customer of community choice providers to make a positive declaration before they can be enrolled. While the switch from “opting-out” to “opting-in” seems small, people generally do not opt-in to new programs.

Over 100  environmental, business, local government, and consumer organizations have united to oppose AB 2145, which is popularly called the Monopoly Protection Act. (Click on this link to access their joint press release)

“Most California utility customers do not have a choice in what entity provides electricity to their home,” San Diego County SupervisorsDianne Jacob and Dave Roberts wrote Bradford in a public letter.

“ … AB 2145 cuts into local government’s statutory rights and ability to procure energy from alternative source on behalf of its residents by structuring CCA as an opt in program. An opt-in program allows monopolizing utility companies to continue their control while stifling market innovation and local CCA growth …”

The bill is presently before the Assembly’s Appropriations Committee and Governor Brown has not taken a position regarding this legislation – but two of his top aids are former PG&E employees.

In its’ coverage of Hunter Stern’s email, the PACIFIC SUN states PG&E should be required to disclose the extent of its usage of third parties to attack community choice providers.

Dawn Weisz, Executive Officer of Marin County Energy, said allowing the utility to hide behind third parties “makes a mockery of the process” set up to ensure they do not use ratepayer funds to attack community choice providers.

Assemblywoman Cristina Garcia, D-Bell Gardens, pointed out that there are a number of CCAs about to launch and “It’s unfair to change the model while these others are still in the pipeline.”

(Image at top of page: Photo taken from Committee on Utilities & Commerce webpage)