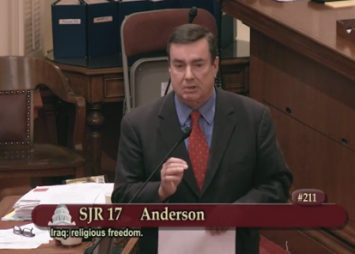 The measure faces imminent death Monday unless legislators act, said Mark Arabo, national spokesman for Iraqi Christians and President/CEO of the Neighborhood Market Association. Concerned citizens are urged to call Speaker of the Assembly Toni Atkins at (916)319-2078 and Assemblyman Richard Gordon, Chair of the Assembly Rules Committee at (650) 691-2121 today to urge passage of SJR 17.

"The passage of SJR17 faces a slow death, quite similar to that of the minority lives in Iraq," said Arabo. "We facilitated the passage of HR 683 in Washington D.C. We facilitated the passage of SCR 2170 within the United Nations. It is quite clear that this assembly lacks the necessary leadership to enact something as simple as a resolution within Sacramento. It has become quite clear that the plight of those affected by genocide has gone on deaf ears to those in Sacramento."

View a video by Senator Anderson presenting SJR 17: http://district36.cssrc.us/content/senator-anderson-presents-sjr-17-order-protect-those-under-attack-iraq   Anderson detailed horrors perpetrated by ISIS terrorists including burying people alive and killing those who refuse to convert to Islam.

He said two-thirds of those targeted by ISIS terrorists are Christians, but that even non-Sunni Muslims are being targeted by the sword. “Nobody should be persecuted or put to deaths because of their religious beliefs. It's never been right in the history of mankind,” Anderson affirmed, praising Democratic Congressman Juan Vargas for getting legislation through Congress calling on the President to take action to support persecuted Iraqi minorities.

“We are at a crossroads, and people are looking at us to be a beacon for the world,” Anderson concluded in his presentation to the full Senate, which passed the measure 33 to 0 before it stalled in the Assembly Rules Committee.