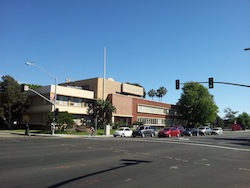 July 23, 2013 (San Diego's East County) -- After nearly a decade of wrangling between the State of California and Caltrans, Old Town State Park is set to be expanded and revitalized with approval of the new California state budget, which includes $436,000 in bond money allocated to demolish the old Caltrans building on Taylor Street.  Most significantly, the abandoned 115,735 square foot Caltrans building sits on top of an ancient Kumeyaay village which allegedly dates back to 500 AD, and which was once a thriving Mexican settlement.

The site was also the location of the first retail business in San Diego, a general store owned by Captain Henry Delano Fitch (later baptized as Enrique Domingo Fitch) on the southwest corner of Juan and Taylor streets.

The effort to make the property transfer went on for some two years under the guidance of California State Assemblymember Toni Atkins (D-78th district).

According to Atkins, Caltrans, after saying an agreement could not be reached with the State Parks Department, made plans to auction off the old building to the highest commercial bidder. Atkins and other Sacramento lawmakers were then enlisted by California State Parks officials and local historical preservation groups to break the impasse with Caltrans, which led to an agreement, pegged to the recently approved bond money.

“This action preserves a rich site with our heritage and removes an eyesore from the historic center to our city,” said Atkins in published reports about the project.

A California State Parks spokesman said that the agency is still in the process of drafting a land use plan for the newly acquired land.  However, drawings and photographs of the site suggest that the area includes at least four Spanish-era adobes and artifacts from the Kumeyaay Indians who used the river before it was diverted on the way to the bay.

Ideas have been presented for the old riverbed to be restored with native plants, including sycamores, willows and oaks that were once a part of the untamed area landscape.

East County Magazine made several attempts to contact local Kumeyaay tribal officials to ask whether they anticipated being a part of the excavation and reclamation process of the ancient riverfront Kumeyaay village, but did not receive a response.