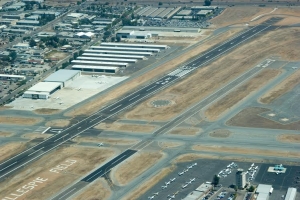 February 6, 2015 (El Cajon)--Gillespie Field in El Cajon ranks high among airports in California in potential for sustainable economic growth and job creation, according to a recent study by the California Dept. of Transportation (Caltrans), Division of Aeronautics.

According to officials with the East County Economic Development Council (ECEDC), a regional non-profit, business-growth organization, the Caltrans study represents an important step toward obtaining additional funding to support efforts for what is called the “aerotropolis” initiative.

The term “aerotropolis,” refers to a business cluster where a community’s infrastructure and economy are tied closely to its airport. ECEDC officials say funding is needed for aerotropolis-related efforts at Gillespie Field such as coordinating smart-growth planning between business interests and local governments and attracting industries that could enhance economic development, increase investment and create high-paying jobs.

“We are gratified that Caltrans confirmed what we already know about Gillespie Field’s tremendous potential for stimulating employment growth and positive economic impact in the region,” said Jo Marie Diamond, ECEDC president and CEO. “The Caltrans study underscored the vision of how Gillespie can serve as an economic hub, both inside and outside the runway fence line.”

The Caltrans study, called the 2014 Caltrans Airport Forecasting Study, surveyed the economic potential at each of the state’s 245 airports, ranging in size from the large international sites with passenger jets to the smallest, single runway airports in backcountry locations. The study ranked Gillespie Field, a general aviation airport operated by the County of San Diego, as one of the best in the state for its class of airport for several reasons:

-- Gillespie Field’s economic potential is supported by access to public transportation and rail links, as well as nearby freeways, including State Route 52 on the north, Interstate 8 on the south, State Route 67 on the east and State Route 125 on the west.

-- Gillespie Field leads all San Diego County airports in number of operations with 183,911 operations in 2013. An operation is the arrival or departure of an aircraft to or from the airport.

-- While Gillespie Field’s two 5,000-foot-long runways cannot support jumbo jets or large cargo aircraft, the runways can serve certain Gulfstream jet aircraft with a range of 7,000 nautical miles, which means a nonstop trip is possible from El Cajon to Russia or Venezuela without refueling.

-- The Caltrans study said the area surrounding the airport currently supports 11,807 jobs with the capacity to add 1.8 million square feet of new business pace and support 20,800 jobs by 2040. Currently, the airport and nearby business parks contribute more than $403 million per year to the economy and accounts for nearly 3,200 jobs, said the ECEDC.

“When it comes to urban planning and sustainable communities, general aviation airports, like Gillespie, can play a vital role as efficient logistical hubs in an economically sustainable transportation system,” said Kantar. “Gillespie has all the pieces in place for exponential business growth and sustainability. But it’s up to the local community to decide what’s best for them and how to take advantage of a runway that’s in their backyard.”

The ECEDC recently announced it has established the Aerotropolis Vision Fund, a dedicated funding within its non-profit, charitable East County EDC Foundation, which can accept tax-deductible donations for funding aerotropolis-related projects.

While growth at Gillespie including the Aerotropolis concept has strong growth in the local business community, support for growth at Gillespie Field is not unanimous.  Advocates of Safe Airport Policies (ASAP), a citizens group of area residents, has opposed recent expansion of flight schools at Gillespie due to concerns of noise, safety and security.  Another organization, Citizens Against Gillespie Expansion (CAGE) has opposed growth of the airport and gone further, calling for the airport to be moved and the land converted to alternative uses.