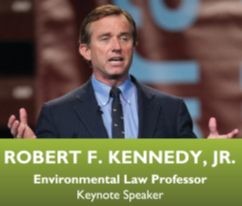 Kennedy is a professor at Pace University, lead counsel for the Natural Resources Defense Council, and founder of the Waterkeeper Alliances. Son of former U.S. Attorney General Robert F. Kennedy and nephew of the late President John F. Kennedy, he will share his vision for the future.

Tickets are now on sale at www.UnitedGreen.org. Tickets for East County Magazine members/donors is just $35 for those who reserve by February 15, since we are an affiliated organization of UnitedGreen through our parent nonprofit Heartland Coalition. (Cost for non-members is $95, and $35 for all students).

The first FSF event was held at Qualcomm Corporate Headquarters in November 2011 and resulted in numerous partnerships and collaborations as people who met there have continued working together. Congressman Bob Filner and San Diego City Councilmember Marti Emerald spoke at that symposium and are expected to return for the March event, as is Lori Saldana. Saldana is a former member of the California State Assembly, professor at SDSU, and one of the founders of Earth Day in Balboa Park. Former Lt. Gov., now Congressman John Garamendi will also be speaking at the March event, along with numerous local professors, and experts-at-large.

“We will keephaving these conferences until San Diego is self-sustaining,” said FSF co-chair, Patrick Hurley. His co-chair, Walter Meyer added, “We hear all the time, ‘There has been enough talking, it’s time for action.’ Our goal is to bring people together who are ready to act.”

In addition to the local experts, a professor from Curitba, Brazil, will be speaking remotely to explain how that city has become a model for sustainability on a large scale. Sustainability consultant Morgan Pitts will present, as he calls it, “the 30,000 foot view,” addressing how all areas of a region must work together, culturally, economically, and environmentally.

Pitts has presented to the European Parliament in Brussels, is currently providing research support for the NRDC’s green building team in Beijing and conducting research for the United Nations University for Peace. Pitts will ask the question, “How do we remake the human presence in the world in a way that is sustainable, fair and just, and which creates no ugliness now or for future generations.” He will talk about how the city of Oberlin, Ohio is working toward that goal and how those same ideas can be applied to the San Diego/Tijuana/Imperial Counties region.

Local sustainability consultant Jim Bell and SDSU Professor Heather Honea have prepared a plan that details how San Diego can be off-grid and lead the way into a new way of looking at the massive environmental issues facing the region and the planet.

UnitedGREEN’s Executive Director, Mark Hanson, Ph.D., said, “At the November event, we brought together experts from academia, government, industry, and the community and already we are seeing projects moving forward as a result of the collaborations forged at that event. At the March event we want the best and the brightest to report on what has been accomplished since November and outline what needs to be done next.”

The goal of the nonprofit UnitedGREEN (GrassRoots Environment and Energy Network) is to speed the transition to a sustainable future for all the people of San Diego by sparking collaborations between key public and private entities by facilitating a grassroots movement that engages and unites the community in a shared fight for a truly sustainable future and fostering projects and initiatives that generate a green economy and accelerate the establishment of green enterprises employing a green-collar workforce. UnitedGREEN had hosted two other green conferences prior to the first FSF in November.

The FSF Symposium is open to anyone who is interested. Tickets for the two-day event are $95 or $35 for students and members of partner organizations. More information and tickets are available on the www.UnitedGREEN.org web site.