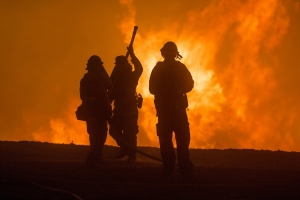 November 26, 2018 (San Diego) -- The deadliest and most destructive wildfire in California history is finally fully contained. The Camp Fire scorched over 153,000 acres and destroying 18,000 structures, including 14,000 homes. At least 85 people died and around 250 remain missing, though that’s far fewer than the over 1,000 listed as missing in the fire’s immediate aftermath.

Firefighters got some help from Mother Nature in the form of rainfall.

But with winter storms forecast, too much rain could lead to mudslides in recently burned areas of the Camp Fire in Butte County, as well as hillsides left bare in Ventura and Los Angeles Counties after the Woolsey and Hill Fires there.

President Trump has blamed inadequate forestry clearing practices for the deadly Camp Fire. But the state’s top fire officials have rejected that argument, noting that years of drought fueled by climate change have led to bigger and more destructive fires.

The Camp Fire began underneath powerlines owned by Pacific Gas & Electric Company, though Cal Fire has not yet announced whether investigators found PG&E equipment at fault. The burned areas included forests that had already been logged as well as suburban communities.

The vast majority of California’s forests are federally owned, with most of the rest under private control.

The federal government has issued a disaster declaration, but unlike in prior major disasters, the Federal Emergency Management Agency or FEMA has not provided trailers or other temporary housing for Camp Fire survivors, many of whom were camped in a Walmart parking lot until they were evicted by officials and left on their own.

The Camp Fire is expected to worsen the state’s affordable housing crisis, with 14,000 people left without homes from the Camp Fire alone – including many at risk of remaining homeless without additional aid.