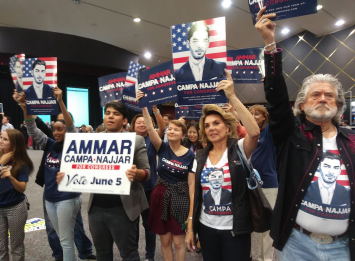 Update June 6, 2018 9 a.m. -- According to the California Secretary of State, with 100% of precincts counted but not late mail-ins or provisionals, the results are: Duncan Hunter 48.7%, Ammar Campa-Najjar 16.3%, Bill Wells 13.1%, Josh Butner 12.1%, Patrick Malloy 6.0%, Shamus Sayed 2.1%, and Richard Kahle 1.1%.  The finish order for candidates was the same in both San Diego and Riverside County, with only late mail-in and provisionals yet to be tallied.

Campa-Najjar, who appears headed to the November run-off against Hunter, previously did an interview with ECM . Hear the interview and read highlights here: http://www.eastcountymagazine.org/hear-our-interview-ammar-campa-najjar-...

June 5, 2018 (San Diego's East County) -- Beleaguered Republican Congressman Duncan Hunter could be in trouble come the November election.  Currently under  criminal investigation for allegedly spending lavish amounts of campaign funds for personal use, he currently has less than half the vote in the primary race.

With 15.3% of precincts tallied, Hunter has 47.62% of the vote.  The big question is who will advance to the top-two run-off election in November. Presently, Democrats Ammar Campa-Najjar, a former Obama administration labor official, and retired Navy Seal Josh Butner are in second and third place with 15.45% and 13.79% respectively, followed closely by El Cajon Mayor  Bill Wells at 13.42%.  Democrat Patrick Malloy has a 6.36% and Shamus Sayed 2.04%. 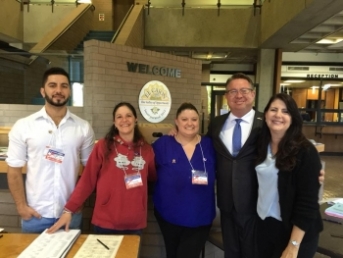 That's in San Diego County, where about 76,000 votes have been counted so far. The district also has some voters in Riverside County, where 3 or 25 precints have been counted, or about 4,600 votes tallied.  Among Riverside voters, Hunter has a slight majority at 51.44%. Campa-Najjar is also in second in Riverside, with 13.13% but Wells is in third at 12.1%, with a narrow five vote lead over Butner.

Should a Democrat make it into the run-off, the key question will be whether dissatistaction with Hunter will alienate a sufficient number of Republicans and independent voters to give a Hunter challenger a viable shot.  The 50th Congressioinal District is among the most solidly Republican in the state, ordinarily out of play for Democrats, though the demographics are slowly inching toward blue. With a grand jury reportedly being convened this month, the prospect of an indictment before Election Day could impact the outcome in this race.

Should Mayor Wells climb upwards to edge out the two top Democrats once all votes are counted, voters could have a choice bewteen only two Republican contenders.  All of the challengers have pledged to restore integrity and ethics to the seat if they win.

Seriously Miriam? You asked whether "dissatistaction with Hunter will alienate a sufficient number of Republicans and independent voters to give a Hunter challenger a viable shot." Are you seriously saying you believe there is a chance Hunter's support will go to a Democrat? A bit of wishful thinking perhaps, but very unlikely.

who thought Obama would carry some of the places he did,  or that a red Alabama district would elect a Dem, which happened only because the Rep in that race was tainted.

Hunter has never before had a challenger able to raise the kind of money that Campa-Najjar is pulling in. The national Dem party has ignored races here in the past due to the heavy registration advantage Reps have. So we really don't know for sure what may happen if there are lots of mailers, either negative about Hunter or positive about his opponent, heavy signage everywhere, etc.  We've also never before had a race here where the incumbent faced the prospect of a criminal indictment.  If that doesn't happen, he'll probably win, but he certainly faces the toughest challenge of his career for thoses reasons, not to mention having an opponent who is actively campaignign full time, not working around some other job.

"CAMPA-NAJJAR LEADS IN RACE AGAINST HUNTER"

Is it that wishful thinking, a real mistake or meant to be misleading and untrue. Until the names go on the November ballot , nobody leads in anything

which we meant to say "Campa Najjar leads challengers in race against Hunter" - sorry, this story has been updated several times by a bleary-eyed editor in the wee hours of the morning!