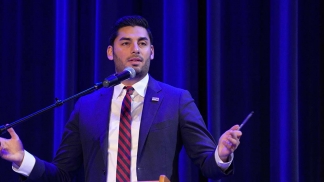 Photo:  Ammar Campa-Najjar speaks at a debate in February before the primary election. Photo by Chris Stone

“Even in the face of a public health and economic crisis, and the undoing of deep racial wounds in the country, I’m deeply moved by the thousands of grassroots donors and supporters who continue to volunteer their time and resources to our people-powered campaign,” said Campa-Najjar in a statement. “This campaign is about giving back to the community that raised me, putting country over party to get things done, and rewarding work, not just wealth in this country.”

The campaign reported an average online contribution of $19 with a total of 104,822 donors so far this cycle. The campaign has rejected all corporate political action committee money.

Campa-Najjar, a Democrat, narrowly lost to former Rep. Duncan Hunter, a Republican, in the 2018 race for the 50th district in east San Diego County.

This time Campa-Najjar faces Issa, who chose not to run for the 49th District in coastal San Diego and Orange counties in 2018. After Hunter pleaded guilty to campaign finance fraud and resigned, Issa announced he would seek to return to Congress in a different district and won the Republican primary in March.

Issa, who was one of the wealthiest members of Congress because of his successful business career, has just over $500,000 on hand after an expensive primary battle against former San Diego City Councilman Carl DeMaio, according to the Center for Responsive Politics.