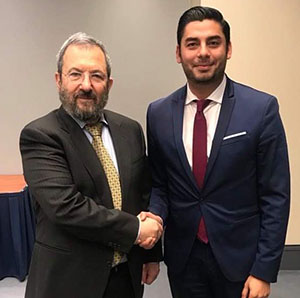 October 29, 2020 (San Diego) - Congressional candidate Ammar Campa-Najjar, reacting to an unfavorable story carried about him by the Breitbart news organization, reiterated on Wednesday his support for a peaceful two-state solution for the Israelis and Palestinians, and his opposition to the Boycott, Divestment and Sanctions (BDS) movement.

In a telephone interview with San Diego Jewish World, Campa-Najjar pointed out that he once had met and shook hands in a moment of reconciliation with former Israeli Prime Minister Ehud Barak, who during his career as an IDF officer commanded the mission which assassinated Campa-Najjar’s grandfather, Mohammad Yusuf al-Najjar.

The grandfather, who was killed 16 years before Campa-Najjar’s birth, was considered one of the masterminds behind the 1972 Munich Olympics massacre of Israeli athletes.  The mission not only killed Campa-Najjar’s grandfather, but also his grandmother.

Campa-Najjar, who follows his Mexican-American mother’s Christian religion, said he considered the BDS movement harmful not only to Israel but also to Palestinian workers who commute every day –“like Mexicans do here” — to work in Israeli industries.  “BDS is just wrong in every way,” Campa-Najjar said.

The 50th Congressional District candidate, a Democrat, is opposed by former Congressman Darrell Issa, a Republican, who a recent poll in the San Diego Union-Tribune  indicated is trailing Issa by a margin of 51 percent to 40 percent.

Campa-Najjar also told me that  he is in support of the Abraham Accords, in which both the United Arab Emirates and Bahrain normalized relations with Israel, and which Sudan also recently agreed to participate in. Campa-Najjar said Israel and the Arab world now recognize that they have a common enemy in Iran.

As important as those agreements are, he said, “there still is much more to accomplish,” especially bringing about a permanent peace accord between Israel and the Palestinians.

Campa-Najjar said that the Middle East is “so much more nuanced than the President (Trump) understands.”