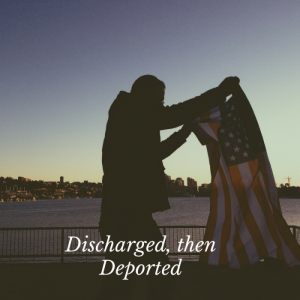 September 21, 2016 (San Diego) - Republican presidential nominee Donald Trump has called for the deportation of all undocumented immigrants, with no exceptions.

But now a San Diego based coalition is calling for protection to stop deportations of hundreds, or potentially thousands of U.S. military veterans who served our country with honor.

A campaign was launched September 18th by a broad coalition including representatives of the veterans community, elected officials, business, labor and immigrant reform communities.

In July, The American Civil Liberties Union released a report bringing attention to many veterans who find themselves unable to return home due to deportation. The report outlines a series of policy changes needed including Congressional and state legislation, federal executive orders and agency policy reforms.

During the press conference, San Diego Congressman Juan Vargas announced legislation that will be introduced to Congress this week.

Norma Chávez Peterson, Executive Director of the ACLU of San Diego and Imperial County states, “Without question, immigrants who are or have been members of the U.S. armed forces–who have sworn allegiance to the Constitution and who bravely put their lives on the line in services to this country–are of concern to us all.”