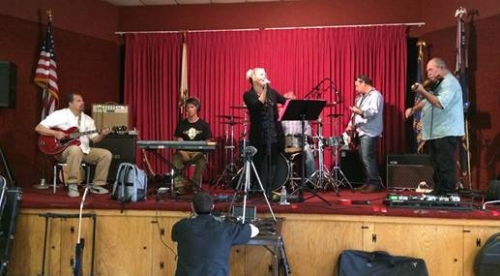 Carmen De La Guerra-Sylva is a local girl. Her parents owned the diner and a restaurant called El Encino when she was a child growing up in Campo. Her father, Dee De La Guerra, was a Kiwanis member and fire fighter for many years and taught her that “giving” was just something you do for your community. Carmen has always been a very giving person.

She came home after living in town to care for her ailing parents and became a permanent member of our community. She has given to the community by purchasing Campo’s first video store (owned by Marla McMullin), she served on the Community Center Board of Directors in the ’80’s before Mountain Health took it under their wing and helped facilitate that transaction. She served on the Campo Fire Dept. board and later in the Campo Fire Department Auxiliary. More recently she was part owner of Campo Diner and a columnist for the Back Country Messenger, a newspaper that served the back country from 2007-2013.

Now Carmen needs our help! She has been diagnosed with pancreatic cancer. She will need many hours of an assortment of treatments including chemotherapy and possibly radiation. She also will need to travel to Los Angeles to see a physician specializing in surgical removal of her type of cancer.

We are also fundraising for Tony Neff and Rebecca Langdon. Tony, Co-owner/Editor of the Back Country Messenger (2007-2013) is another very giving individual. So when his wife’s sister, Rebecca, needed a kidney and she was not able to donate, Tony stepped up to the plate immediately. Through the Kidney and Pancreas Transplant Center at Sharp Hospital, he will be able to donate even if he isn’t a match due to their Kidney Exchange Program where multiple matches and donations can be made.

There are many expenses that insurance doesn’t cover. Fuel alone is a big drain on their resources. Other expenses include prescription co-pays, eating when in town all day.  Both the donor and the recipient have to be in excellent health. Every aspect of their health is evaluated, by specialists when necessary, and used to formulate the transplant. There can be no chance of infection in the recipient or the donor. This means all dental work must also be completed before the transplant can take place.

We ask you to come enjoy the music and the food. We thank you for your support.

Dave’s Kitchen, a band from La Mesa with that good ole rock ’n roll sound! Jim Neff (who attended Mountain Empire High School many years ago), his wife, Giavana and their band will perform.

Damian Bowles Band.  Damian was also a student at Mountain Empire High School. He and his band, who also includes his wife, Marion, will play an array of country and rock and roll.

The musicians are donating their time, so please feel free to tip them!

A silent auction will also be held.