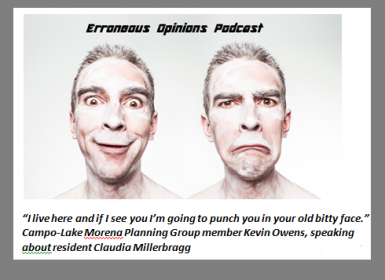 “I live here and if I see you I’m going to punch you in your old bitty [biddy] face.  At this point, yeah, it’s trivial and it doesn’t  (expletive) matter, but this is the town I live in and I’m trying to do good.”

Later in the podcast he stated that if he saw Millerbragg at the store, “I’m gonna smile, I’m gonna say hello and I’m gonna give a friendly wave. And she’s gonna (expletive hate that, absolutely hate that. And that’s killing them with kindness.”

His podcast , which he since removed off his website, further discussed a “mid-life” crisis he indicated he is suffering including loss of a job and frustration of structuring of agenda items. He indicated he was considering quitting the planning board seat that he was appointed to fill after Millerbragg resigned from the post. He later told ECM he has no plans to resign at this time.  He also indicated that if he did step down, he would likely continue live streaming planning group meetings as a public service—meaning Millerbragg could still encounter Owen even if he were no longer on the board.

The dispute arose after Owens was twice blocked from posting on a community forum, most recently over posts involving noise complaints raised.  He also posted a poll asking forum members their opinion on Millerbragg. Millerbragg says the posts were rude, Owens says they were respectful. Neither side kept copies, both parties told ECM. Millerbragg says some posts were removed by a male administrator, not her, prior to her blocking Owens permanently.

He has since started a rival Neighborhood Watch page that has attracted some community members.

Owens said others have complained of being blocked off the forum by Millerbragg and he provided written comments from several as evidence that he's not the only one who felt Millerbragg had been too quick to block posts with which she disagreed.  There been other posts supporting Millerbragg on social media.

But other blocked posters have not resorted to threats of violence, and the podcast wasn’t Owens’ only attack on Millerbragg.  He has repeatedly referred to her as a witch, hag, and beast on social media posts.

In one post on Erroneous Opinions, he wrote, “Does anyone know how to get rid of a witch like Claudia Millerbragg? I have one that lives in my town and I’d like to get rid of her…Asking for a friend…Our science division is working on a device to transport her back to the fantasy world in which she lives. However funding is short at the moment and we may need to find an alternate means of transportation.”

On the Mountain Community Page he wrote, “I’m done playing nice with her.  F**k you, ClaudiaMillerbragg.”  He also posted a witch image that he claimed was her yearbook photo.

Owens has also posted that he was blocked off the Brush Fire Partyline, a separate online forum not run by Millerbragg. On his website, he posted a derogatory remark stating “boys have a penis, brush fire partyl ine has a vagina.” Owens said he objected to what he viewed as  “political” posts on the emergency information site; the site had posted info on homelessness and hepatitis, a declared county emergency, recently

As for his remarks about Millerbragg including those made on tape, Millerbragg told ECM, “I consider his statements a threat and that he is attempting to incite others to cause damage to me.”

ECM asked Owenss about his conduct.  He called this a “learning experience” adding “I do not see how this comment is a threat,” referring to his online call for someone to “get rid of” Millerbragg.

As for his podcast threat to punch Millerbragg in the face, he contends it was taken out of context and that his comments were not made in any official capacity as a planning group member, adding,” there was no attempt to instill fear in this individual….My comment can easily be classified as nothing more than angry utterances or ranting and as it stands is constitutionally protected as free speech.”

“Advocating violence is NOT protected speech,” Myers wrote in an email to ECM today.

He added, “In today’s political discover where too many people are using social media to threaten others, in my opinion [this] does constitute a real and measurable threat [CA Penal Code Section 422).

Moreover, he noted that “fringes” of society  “look for signals from our elected official and we have many documented incidences where that fringe has acted. It’s unconscionable that a public official would advocate violence against women.”

A second Sheriff’s department official, who spoke off record, indicated the threats should be enough to justify a judge to issue a restraining order against Owen if Millerbragg should seek one.

ECM sent copies of Owens’ threats to planning group chair Billie Jo  Jannen and Supervisor Dianne Jacob.  A spokesman for Jacob’s office indicated that while Supervisors typically don’t intervene in disputes involving planning group members,  her staff has forwarded the threatening posts to both County Counsel and the Sheriff.

Jannon stated, “Some people in this community have too much time on their hands and too much ego invested in slamming others.  This is far from the only example of this behavior, and unfortunately, it has become more common then not through the entire Internet.”  She indicated that a planning group ethics document was removed from the group’s bylaws several years ago because it was wielded as a tool to shut down dissenting voices on the board.

In his since-removed podcast, Owens voiced concerns that he could be voted off the planning group board.  But though some community groups’ rules allow censure of members for offensive conduct, neither the Planning Group nor the Supervisors have the power to remove a Planning Group member unless they miss too many meetings, Jannen and Jacob’s office have indicated.

However the public does have such power, through the recall process.  For details see http://www.sandiegocounty.gov/cob/docs/policy/I-1.pdf.

Pete Tollner you are not listed with CALI - CA Association of Licensed Investigators, CALI-PI-org nor CA Government of Security and Investigative Services as a licensed investigator. An unlicensed PI violates CA Private Investigator Act Business and Profession Code 7523. There is a potential jail and fine penalty for both you and Keven Owens. I have forwarded a copy of your posting to law enforcement, CALI and DCA for their consideration. Your statements about me in your posting are not based in facts and are libel. I have added your posting to my own case that I am building. I understand that Keven is upset that his wife has separated from him, however continuing to attack me is not in his best interest.
I am a private investigator who has been hired to look into the constant harassment of "perceived enemies" of Claudia Millerbragg, at the hands of Claudia Millerbragg. My client is building a lawsuit against her for defamation, slander, libel, harassment, wrongful interference of business, loss of enjoyment of property, and more. I have encountered DOZENS of local residents and neighbors of Ms. Millerbragg. who attest to the unbalanced and dishonest behavior of Ms. Millerbragg. As a matter of due diligence, I have also asked about Mr. Owens. Thus far, what I have discovered is a pattern of abuse by Ms. Millerbragg. I have copies of profanity-laced and threatening emails, private messages, and facebook postings by Ms. Millerbragg. It seems that anyone with an opinion which differs from Ms. Millerbragg's, and who will not let Ms. Millerbragg bully them and shout their opinions down, becomes a target of an unhinged, psychologically disturbed vendetta and rath carried out by Ms. Millerbragg. While on the other side of the coin, I have heard that, although Mr. Owens has strong opinions and can be polarizing, he is well-respected in the community, has gone above and beyond in service to his community and aid to his fellow neighbors; wheras, Ms. Millerbragg does little more than cause trouble and harass. Professionalism aside, it is my personal opinion that not only does Ms. Millerbragg DESERVE a punch in the face, but doing so would make dozens and dozens of residents quite happy. I encourage you to look further into the issues, Ms. Raftery, do YOUR due diligence on this menace to her neighbors and community.

He sent an email to us stating "I do not know this man and have never known this man, nor have I ever been in contact with anyone by that name."

We are now closing comments on this story. If Owens, Millerbragg, Tollner etc. have issues with each other, they need to resolve them elsewhere such as in a court of law, not through negative and harassing posts on our website.

The courts are the appropriate remedy for defamation, if it occurred.

For you to condone violence, punching a woman (or anyone) in the face for speech, even if  negative or false, is to condone a criminal action.  The law provides no right to assault and potentially injure someone because you disagree with their words.

If actual libel or slander occurred, your client is of course entitled to seek all legal remedies in court. But at this point arguably your own remarks about Ms. Millerbragg could be construed as such.  We're journalists, not judges, and we have given both parties ample space both in our article and comments they posted to air their views.

Kevin and Claudia. I gave you both a chance to respond to our story and comments made by each other initially.  But please refrain from further remarks here. Our forum rules prevent bashing other posters, personal insults, etc.

You've both had your say, and we've heard what neutral law enforcement officers stated whom we interviewed.

I don't want to have to close comments to prevent abuse of our rules, so can the two of you please refrain for now until our readers have had a chance to post their comments, if they choose.  I kept comments open pending our newsletter going out today, whcih is when we have the most reads. Thanks for respecting our rules from here forward, so that we can allow diverse views and give everyone an opportunity to voice their opinions or concerns.

Try to just stop yourselves Kevin and Claudia.