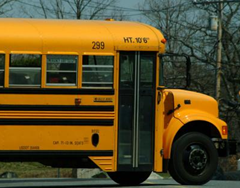 By Miriam Raftery
January 30, 2018 (Campo) – A knife-wielding man who punched a Campo Elementary School bus driver in the face on May 25, 2018 has been sentenced to a year in jail, with part of his sentence slated to be served in a drug rehabilitation facility.

A grandmother at the bus stop tackled the suspect, who shouted that he feared a drug cartel was going to injure his children who were on board. He did not threaten any of the children, according to the prosecutor.

Parents helped all 23 children on board the bus escape out a back entrance during the bizarre incident.
Matthew Douglas Barker, 37, of Campo pled guilty to assaulting the bus driver and to child endangerment.  More serious charges were dropped, since the judge found no evidence of attempted kidnapping or carjacking the bus.
Barker admitted to taking methamphetamines that caused him to become delusional.  His wife had died in leukemia the prior year, leaving him to care for his two young children.
Barker apologized to the victims, stating, “I really can’t imagine what I put them through,” adding, “I’m a good man.”
Judge Robert Amador showed compassion toward Barker, suspending a six-year prison term provided he attends a parenting course, a long-term grief counseling session and drug rehab program and does not violate terms of his probation, the Alpine Sun Reports.
The Judge noted that the defendant had not received adequate mental healthcare, but cautioned Barker that he’ll need to “stay on the straight and narrow” in the future.
Judge Amador hailed 78-year-old bus driver Harold Brandt as a “hero” who risked his life to protect the children.
Barker’s parents currently have custody of his children and wil continue to care for them, but Barker will be able to see his children as he continues in a long-term drug rehab program.

The scourge of this drug (referred to by numerous street names) is rampant across the U.S. Seems that everywhere one looks, a family member or someone we know is using it, usually with disastrous results. I personally have been touched by the results of family members using this insidious monster called Meth. And I can tell you, it's heart breaking, especially when children are involved. Used even one time, this drug can cause a person to become addicted for a lifetime. Even after someone gets "clean", the temptation to use again is typically very powerful - and they often do. People who use Meth (Tweakers), affect entire families - sometimes multiple generations, who suffer the consequences because someone chose to get high. The fallout: homelessness, theft, robberies, assaults, extra medical care, etc. Just some of the long term results caused by drug abuse.

You're right that it's highly addictive.  It also ruins users' skin and teeth.  Uses soon look far older than their years, if they don't OD and kill themselves first or wind up behind bars for crimes to feed their habit.