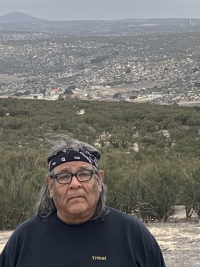 “Our reservation is in dire financial condition. We have really nothing to give our youth…All we have are false promises.” – Denis Largo, tribal elder who delivered a petition calling for a vote to overturn wind project approval

February 14, 2020 (Campo)—Whistleblowers in the Campo band of Mission Indians claim that their tribal leadership pushed through approval of a massive wind project during an improperly noticed meeting. They have now collected enough signatures to overturn that approval with a revote.  But despite the Feb. 13th deadline to notify tribal members of a meeting to revote on the controversial project, several tribal members say they have not received any such notice.

The proposed Campo Wind project would allow 60 turbines built by Terra-Gen on the reservation. Each would be 586 tall, the tallest wind turbines ever built on land, according to Donna Tisdale, chair of the Boulevard Community Planning Group, which also opposes the project. 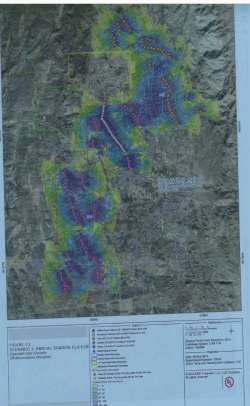 A map of the reservation is filled with red dots representing the proposed turbine locations, far closer to homes than is permitted at many other wind projects.Some homes will have turbines on multiple sides. The turbines will be far bigger than those at the existing Kumeyaay Wind Farm nearby – a project that has generated complaints from many residents who say noise, infrasound, flashing lights and blade flicker have caused headaches, sleep disruption, drops in property values, and fears that a growing number of cancers may be linked to stray voltage from the turbines. 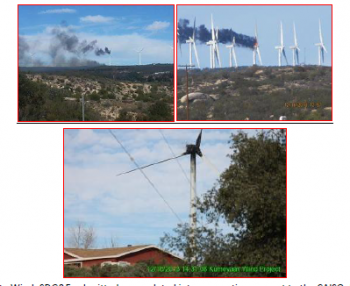 Yet no adequate mitigation of those impacts has been done, and documents for the new project proposed reveal that the tribal leadership denies any problems with the existing wind turbines – despite well documented complaints including a medical study at California State University, San Marcos on area residents which found two-thirds suffered sleep disruption and measurements taken by an expert who found stray voltage 1,000 times higher than normal in some homes on the neighboring Manzanita Indian reservation close to the turbines.

Residents fear the new project, far larger and much closer to homes on multiple sides, will render their homes uninhabitable. For tribal members, who are not allowed to sell their home or land, that means losing everything – their health, their land, and their children’s future.

Yet another wind project is planned just off the reservation nearby, adding to residents' concerns.

“We’ll be surrounded,” says one tribal member who asked to remain anonymous for fear of retaliation. In the past, tribal members who have opposed the will of the leadership have been threatened with job losses, disenrollment, and even physical violence, according to the whistleblowers.  The member notes that after one contentious tribal election, a winning candidate was hit over the head and hospitalized, later obtaining restraining orders against multiple assailants. Court records document the latter.

Another tribal member says he doesn't want his grandchildren to grow up in poverty. “All of our land will be taken,” he says in a voice heavy with sorrow.

Whistleblowers told ECM that current tribal Chairman Harry Paul  Cuero Jr. has violated their tribal constitution, which requires that tribal general council meetings be held monthly. Instead, after the 2012 election, no such meetings were held for six years, the tribal members state. The new leadership fired the tribal lawyer and disbanded the tribal police department, leaving little recourse for those seeking protection from alleged abuses of power.  No taping of tribal meetings is allowed, nor are members allowed to bring witnesses such as attorneys or media members, a former tribal council member told ECM.

On April 3, 2018, the tribe did convene a meeting for tribal members to meet with Terra-Gen in what members say was described as an “informational” meeting.  Though the sign-in sheet reportedly had 60 names, “half the people left disgusted” believing no vote would be taken, and there was no quorum, members who stayed that night now state.  They claim that after most opponents left, leaders brought in supporters , including many family members, to push through an unannounced vote 34-14 to approve the Campo Wind project.

“I heard about it [the meeting] through the wind,” one tribal member said.  “It was an illegal vote.”

Two concerned young women in the tribe started a petition to call for a new vote, recalling that a few years back, another unpopular wind project, Shulu’uk Wind, was approved and later overturned in a revote.

Supporters have argued that the project would generate revenues for a tribe in which many members live below the poverty line. But opponents say the tribal leadership, which does not live on this reservation, is pursuing “dollar signs” at the expense of those who live here.  They say tribal members have not shared in any significant revenues from the already existing wind project – and further contend that the leadership has not disclosed casino revenues, which is required under state law.

“I’m the tribal elder that delivered the petition to Mr. Cuero personally in his office on January 23rd,” says Denis Largo, a U.S. Navy veteran who served about the USS Midway in Vietnam.  A cancer survivor, he is concerned about the heath impacts the project could pose and the process “that takes away our rights as a tribe.”

He adds, “Our reservation is in dire financial condition. We have really  nothing to give our youth, nothing to pass down. All we have are false promises. These windmills are supposed to bring us some glimmer of hope, but all they’ve brought us are despair.. This administration has just kept us in the dark – and it’s time to bring some light to it.”

Others fear loss of artifacts and cultural heritage, noting that an ancient village was bulldozed in nearby McCain Valley, according to a witness who spoke under condition of anonymity.  “This will be worse,” the whistleblower said, noting that tribal leadership already turned a blind eye when Caltrans destroyed the signature “Indian rock” on their reservation.

Some tribal members have tried to bring federal attention to their plight.  In 2016, one member wrote to the Bureau of Indian Affairs to complain of the cessation of general council meetings and more. In 2019, she wrote again with corruption allegations. But no action has been taken.

Tisdale says she emailed Bureau of Indian Affairs representative Dan Hall to ask what happens if the petition is ignored, but she had not received a response by our press deadline for this article. ECM contacted the BIA’s regional office in Riverside, and no one responded. ECM has also reached out to Congressman Juan Vargas, whose district includes the Campo reservation, for comments and to ask if his office will request that the BIA provide oversight to assure a fair revote process. So far, no comments have been received from Vargas, though a staffer suggested concerned tribal and community members request a form to seek constituent services help.

Update: On Feb. 15, after this article was published, Tisdale notified ECM, "After I talked to you, the BIA did respond that the vote is an internal tribal matter that they have no role in."

ECM called Chairman Cuero on February 13, the deadline to notice tribal members about a revote meeting.  Asked  if he had received the petition seeking a revote on Campo Wind, he replied, “We did receive the petition.”  Asked when a meeting would be convened for a revote, he stated, “I don’t know that date yet,” then added, “I have no comments on that” and hung up on our editor.

Several tribal members on Feb. 13 and 14 said they had not received any notices of a new meeting.  One said some other members received notice of an upcoming meeting described merely as “elections” with no mention of the petition or wind project.  Tisdale, who is not a tribal member, said she has seen a tribal agenda listing a meeting on Feb. 19  at 5:30 p.m.  with “response to petition” listed on the agenda.  But those entitled to vote are concerned that lack of notification is another attempt to prevent the 65 members opposed to what they view as the effective destruction of their reservation from being able to exercise their rights to stop the project.

They want the BIA to intervene and provide oversight to assure that their rights are protected. In addition to a new vote on the wind project, they want a forensic audit and investigation of questionable financial actions, including a re-lease of existing wind turbines signed in the name of tribal leaders—not the entire tribal council.

The Native Americans who live on the reservation where the wind turbines are set to be built say that they are full-blooded tribal members, resented by non-full blooded members who live elsewhere. “They are jealous. They call us “Muhti-hei, or new ground,” one member explains.

If a revote  is thwarted, construction could begin soon, once a public comment period is over.  A final Environmental Impact Statement notice was posted this week in the Federal Register at www.campowind.com: https://www.govinfo.gov/content/pkg/FR-2020-02-10/pdf/2020-06669.pdf.  The deadline for public comments ends on March 11th.

Tisdale, who reviewed the EIS, says the proposed mitigation measures are “basically useless.”  The turbines slated on the reservations would also line a hill behind Tisdale’s home. The nonprofit Backcountry Against Dumps, founded years ago by Tisdale to oppose a landfill project on tribal land, plans to pursue legal action against once again if the tribal members are not able to stop the project internally, she told ECM.

Tisdale has submitted comments voicing concern that among other issues, acoustical studies on potential noise and infrastructure impacts of the project relied on smaller wind turbines than the goliath turbines set to be built at Campo Wind-- larger than any ever built on land, according to Tisdale. She contends the local residents will be "guinea pigs" subjected to dangerous conditions.

The petition, signed by 65 tribal members who seek to undo the project earlier approved by just 34 votes, sums up the problems this way:

"We firmly believe no amount of income from any wind turbine project is worth the substantial losses it will create for our future."