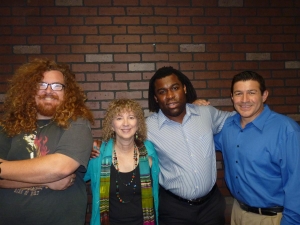 Hear our exclusive interviews! Click below to listen (sound files may take a few moments to load)

"It's been an emotional roller coaster," says Jauregui, who likens the Chargers' secret dealings with the city of Carson in Los Angeles to "finding out your spouse is cheating...As fans, we're going to take a stand."  Jaregui, on behalf of fans, accuses the NFL of operating as a monopoly. He has sent a letter to City Attorney Jan Goldsmith asking the City to file a lawsuit to keep the Chargers in town.

Quinn, via phone interview in New York, says the City of San Diego has a strong legal case against the National Football League (NFL) for violating the Sherman Anti-Trust Act and its own NFL charter. Quinn has sued the NFL several times on anti-trust grounds—and has a 100% winning track record.  But so far, the City has punted on its option to file suit--and Boltman is leading fans in a charge to persuade the City to score a win for fans at the courthouse.

The attorney says the NFL has acted like a monopoly and that threatening the City to meet NFL/Chargers demands or lose having an NFL team now or in the future is illegal.

Mark Fabiani, special counsel for the Chargers, also has a high-profile background as  special counsel to President Bill Clinton and a former senior official in the Justice Department. Fabiano told ECM that "The team's lease with the City of San Diego explicitly prohibits the City from doing anything, including filing lawsuits of any kind, to prevent the team from relocating.  The team bargained with the City in 2004, when the lease was renegotiated, and we gave up important lease provisions (such as the requirement that the City maintain Qualcomm as a "state of the art" stadium) in return for the prohibition on lawsuits."

But Quinn says that clause in the City's  2006 contract with the Chargers  is unenforceable. “Under the Supreme Court law you cannot waive a procedure in anti-trust violation; they couldn’t waive back in 2006 a violation that was going to occur in 2015," the anti-trust lawyer insists. "That’s against public policy.”  Read the lease clause.  Quinn cites this case as precedent: "The doctrine goes back to Lawlor v. National Screen Service Corp., 349 U.S. 322 (1955)."

Fabiani retorts, "We respectfully disagree with the opinion of the lawyer you have consulted."  Asked why the Chargers don't simply wait until voters weigh in on

The City is planning to put a measure on the ballot in January to ask fans to fund a stadium—but there’s no guarantee the Chargers will stay in town even if voters approve the measure.

Quinn says if the City files a suit, a judge could issue an injunction ordering the Chargers to stay in town – at least until fans weigh in on whether or not they will approve an initiative to fund building the stadium the Chargers have long sought.

But Fabiani, asked why the Chargers don't wait until voters weigh in on funding a stadium early next year, had this to say. "We negotiated with the City to find a way to comply with the California Environmental Quality Act (CEQA) in the short time the City had available to it.  Typically it takes 12 to 18 months to complete a satisfactory Environmental Impact Report.  The City proposed to complete one in just three weeks.  This was not an acceptable solution for the team, because it is a solution that in the history of California has never been tried before.  We were unwilling to go along with the City's plan, a plan that has been widely criticized by independent experts." He adds that San Diego's leading environmental attorney recently called the City's EIR a `piece of trash'"

An e-mail from ECM to Goldsmith’s office elicited this response today from his assistant, Gerry Braun: “The City Attorney has said everything he wants to say on this topic. Mr. Quinn’s enthusiasm for his legal strategies has not escaped our attention. Once he has filed his lawsuit, we will review it. We may have more to say at that time.”

However Quinn says  it’s the City that has the strongest standing to file a suit,  not fans or any individual. That’s because the City has invested money to fund studies, stadium plans and an environmental impact review while the Chargers have failed to negotiate in good faith, Quinn says.  The City also stands to lose significant revenues if the team bolts to Los Angeles as the team is currently negotiating to do.

Braun fired back, "It appears that anyone who has purchased a Chargers product has standing."

He attached the following link as evidence: http://www.brianmcmahonlaw.com/CM/Client-Bulletin/Ten-Point-Checklist-fo... .

While a fan may have standing to sue under the Sherman Anti-Trust Act, whether any fan could prove substantial financial damages is questionable, whereas the City presumably could.  Losing the Chargers likely also means losing future Super Bowls and Holiday Bowls--substantial potential revenues sources, in addition to wasting money on stadium plans, studies and an Environmental Impact Report.

Now,  “Boltman” says he’s willing to lead a charge to put a second measure on the ballot- this one asking taxpayers to approve funding an anti-trust lawsuit aimed at keeping the Chargers in town.

It's no certainty whether either initiative would pass, since some San Diegans, notably Councilwoman Marti Emerald, have said tax dollars would better be spent on building fire stations and providing public services.

If the City did take legal action and the Chargers leave anyhow, a court could award a multi-million dollar settlement to the City. A judge could also award San Diego the rights to keep the Chargers name – and potentially attract a new NFL team, giving loyal fans something to cheer for in the future.

The City has given the Chargers a September 11 deadline to commit to stay in San Diego, so the City can meet its deadline to put the funding measure on the ballot next year.  But Jaregui told ECM if he were a "betting man," he wouldn't bet on the Chargers coming to the table on September 11--absent some legal muscle.

If Boltman/Jauregi's plans prevail, fans/voters may ultimately have the final say on whether public money should be spent on legal action to try and recover taxpayers' money or keep fans' favorite football team in town.

Chargers fans  and readers- please weigh in! Should the City fight to keep the Chargers?  Share your views in our comments section below!

Sign up for your free weekly copy of East County Magazine and free wildfire/emergency alerts at http://www.eastcountymagazine.org/wild-fire-alerts

the $7 billion/ year nfl is NOT the friend of anybody. they are corporate welfare at it worst and a taxpayer rip off. the league and all the teams should stand on their own and be free to do as they see fit. I see people here who rally against big government and corrupt government, and the nfl facilitates both.

Kathi, well said you're preaching to the choir. We fans have supported this franchise for over 54 years. The Spanos family owes it's fans and the city of San Diego and opportunity for the team to come to the table and "diligently" negotiate in good faith with the city of San Diego. Anything less would be a disservice to the Chargers fans that have supported this franchise for over 54 years.
The Spanos family truly doesn't want to stay here but they shouldn't be able to take the team logo or name. I have been a die-hard charger fan since 1961. I remember as a little girl at Balboa stadium watching them with my parents while sitting on the grass. I have grown up with the Chargers, babysitting for some of the players in the 70's, personally knowing some of the players in the 80 and 90, teaching my daughters all about football by watching OUR team and now teaching my grandkids about the game. We all have season tickets and have for several years, going to all the events and welcoming the Chargers home after away games. My grandkids were in a stroller when they went to their first welcome home event. My 7 year old grand daughter made rubber band good luck bracelets for each team member for good luck last time they went to the playoffs. Many of them still have those bracelets to this day. You see I cannot allow the Spanos family to take apart of my heritage and tradition away from this native San Diegan. They can move their business but not the name and logo of MY team. I will do whatever it takes to challenge that in or out of court. See its more than the almighty buck that they are trying to take away from this city its a part of my life and heart.