Still have an absentee ballot? You can drop it off at any polling place. 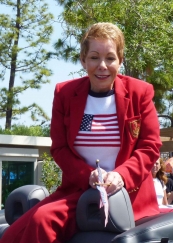 June 5, 2012 (San Diego’s East County) -- In the final days and hours before the election, East County candidates have been pounding the pavement and blitzing cyberspace in the push to get their messages out.   So have backers and opponents of ballot propositions.

79th Assembly candidate Mary England, a Republican, spent this morning waving at morning commuters with an entourage of sign-toting supporters.

In El Cajon, opponents of the Prop D Charter City initiative have walked 19 precincts, phoned 10 more, and passed out flyers at a local shopping mall and the Wings Over Gillespie air show, according to No-On-D spokesperson Bonnie Price.

50th Congressional district Libertarian candidate Michael Benoit has asked his supporters to make phone calls to voters from home.  Democrat David Secor, meanwhile, has also been campaigning hard – reaching out to voters at events ranging from progressive liberal to conservative Tea Party events in his quest to emerge among the top two candidates and qualify for a run-off against Republican Congressman Duncan Hunter in the fall.