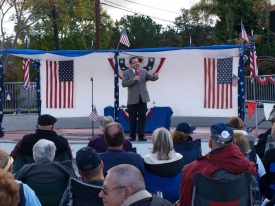 February 20, 2010 (El Cajon) – T.E.A. (“Taxed Enough Already”) Party protesters rallied in an El Cajon park yesterday, turning out despite drizzly weather. “We were happy with our big turnout considering the weather conditions,” organizer Barry Willis told East County Magazine. Just how big that crowd was, however, has become a point of contention. 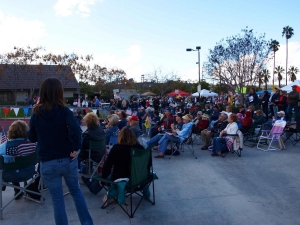 ted several hundred, while the Union-Tribune estimated the crowd at 1,000.News videos show at least several dozen and this photo (left) has close to 100 individuals visible. 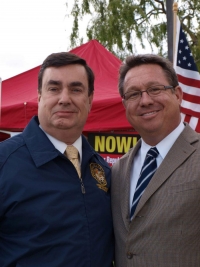 “This is America, look around. People are very concerned, and what else can they do?”said Congressman Hunter, the Union-Tribune reported. Hunter also announced his endorsement of Popaditch in the neighboring 51st Congressional District, ECM has learned.

El Cajon Vice Mayor Bill Wells offered this assessment to East County Magazine.  "Like the national movement, this event focused on the expansion of government, wasteful spending and a growing tax burden," said Wells, who blamed Democrats for destroying prosperity. (Wells estimated the crowd size at 500.)

Media coverage of the local event had inconsistencies and some questionable omissions. Channel 9 quoted “concerned citizen” Tony Krvaric predicting the “next American Revolution” that will sweep out incumbents---but failed to identify Krvaric as Chairman of the San Diego Republican Party.

Channel 8 mentioned a recent CNN poll found “half of Americans don’t know what the Tea Party is all about” but did not provide a link. View channel 8 video.

Polls on Tea Parties show mixed views; many Americans unaware of the movement

According to that CNN poll, two-thirds of Americans said they had no opinion at all on the movement.  24 percent of those surveyed said they generally support the Tea Party movement and 11 percent say they have actively supported the movement (attending a rally, making a donation, or taking some other step). Of this core group of Tea Party activists, 6 of 10 are male and half live in rural areas.

An MSNBC poll found 25% said they knew “very little” about the TEA Party movement and 23% said they “know nothing at all.”

FAIR (Fairness and Accuracy in Reporting), a nonpartisan factcheck organization, called NBC on the carpet for asking a leading poll question and claiming the TEA Party is more popular than Democrats or Republicans. FAIR observed that the same poll found that nearly half (48%) said they knew very little or nothing at all about the TEA Party movement, raising questions about the validity of the poll movement.

Of people who support the Tea Party movement, only 2 percent think taxes have been decreased, 46 percent say taxes are the same, and a whopping 44 percent say they believe taxes have gone up, according to the Poll.

Among the population overall, the numbers were quite different:  24 percent of respondents said they INCREASED taxes, 53 percent said they kept taxes the same, and And 12 percent said taxes were decreased.

Both sets of numbers reflect a lack of knowledge of the facts.  In actuality, taxes have been CUT for 95% of working families in America under the Obama administration. The nonpartisan fact-checking site, PolitiFact, deemed the following statement made by the President in his January State of the Union speech to be “true”:

“We cut taxes for 95 percent of working families. We cut taxes for small businesses," Obama said. "We cut taxes for first-time homebuyers. We cut taxes for parents trying to care for their children. We cut taxes for 8 million Americans paying for college." Under the Stimulus bill, single workers got $400 and married couples got $800 in tax cuts. According to analysis by the independent tax policy center, the only people who wouldn't get a tax cut are those who make more than $250,000 for couples or $200,000 for a single person. Obama has indicated plans to raise taxes on the wealthiest Americans and eliminate some corporate loopholes.

Some TEA Party activists cite concerns over increased government spending, a valid issue given massive sums allocated for the stimulus program. The Obama administration maintains that as during the Depression, spending on infrastructure projects will put Americans back to work, but has pledged to freeze most federal spending (with notable exceptions, such as Defense) in 2011 in order to reduce the deficit.

Other elements in the movement

While many in the TEA party movement are interested primarily in tax and spending issues, the movement has attracted some who call for a return to conservative values on social issues.  Other speakers at Saturday's rally addressed issues ranging from abortion to battling terrorism.

Many TEA party participants view thesmelves as patriotic, wearing tricorn hats and bearing flags.  But some TEA Party events have drawn criticism for attracting protesters bearing racist messages and images. Even a national poll by conservative Fox News station found that 88% of its viewers polled said the TEA Party movement is a “fruitless mix of racism and conspiracy theories.” 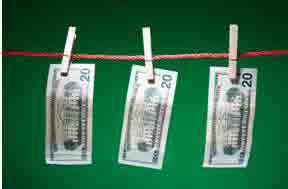 One fact not widely known is that while TEA parties have been portrayed as grassroots rallies that simply sprung up across the nation to reflect sentiments or ordinary citizens, the TEA Party movement is actually heavily funded by corporate lobbyists and right-wing think tanks.

Large corporations, particularly those in oil and gas industries, stand to lose billions under Obama administration policies to close corporate loopholes, penalize corporations that shift jobs overseas, and transition to a “green” economy based on renewable resources such as solar and wind energy.

According to the nonpartisan website Source Watch, “Reports indicate that the Tea Party Movement benefits from millions of dollars from conservative foundations that are derived from wealthy U.S. families and their business interests. Is appears that money to organize and implement the Movement is flowing primarily through two conservative groups: Americans for Prosperity and Freedom Works.” Those two entities are “lobbyist-run think tanks” that are “well funded”, providing logistics and organizing for the TEA Party movement nationwide, ThinkProgress.org has reported.

Media Matters, a nonpartisan site founded by a conservative, reported that FreedomWorks receives substantial funding from David Koch of Koch Industries, the largest privately-held energy company in the country, and the conservative Koch Family FoundationsMedia Matters reports that the Koch family has given more than $12 million to CSE/FreedomWorks between 1985 and 2002. In addition, Media Matters lists the Sarah Scaife Foundation, which is financed by the Mellon industrial, oil and banking fortune, as having given a total of $2.96 million in funding to FreedomWorks, the major backer of the TEA Party movements.

At a state level, Democratic leaders have faulted conservatives for demanding more tax cuts while refusing to consider any revenue increase proposals at a time when deep budget cuts have already slashed fund for healthcare, education, social services, fire and police protection.

Regardless of poll numbers or financial backing, TEA parties have clearly succeeded in gaining a following among people who are either disenchanted with their government and want to shrink it further--or are simply misinformed about what government is actually doing.

Locally, the East Party TEA Party plans to hold another rally on September 18, Willis disclosed. “We will also direct others to an informal rally on April 15 at the Post Office in El Cajon (Lexington Ave.) to show unity of support with the TEA Party Express Rally in Washington D.C. on the same day,” he said. Some local members also plan to attend a TEA Party rally in Nevada on March 27 seeking to “Dump Harry Reid,” he said, referring to the Senate Majority Leader.

I think that a different approach to the public. ~oakley sunglasses~

its sounds like a nice post.i am search always this good and nice things. Canvas Prints you must watch this post is so informative for all.

Well it's cool to see representatives from both the Republican party and the Libertarian party meeting together and speaking at a T.E.A. rally. The more these parties work together the more it will make our CitizenSecure. There will always be topics that the parties can argue about or disagree, but I feel like there will also be topics that they can work together to overcome.
Carly

Politicians and their game. I don't think this TEA party matter much. They are still going to get taxes and spend carelessly without thinking. Tony Robbins

I heard from some friends of mine in Pennsylvania that there is a lot of infighting in the party now because they do not like the direction the party has taken on over the last several months. Pennsylvania tourism

I know a little about Tea Party Movement. All I know is that they are primarily concerned on tax curtailment and spending Issues.. work from home program

Did the Tea Party people intentionally display the the two United States Flags backwards on the stage or are they just stupid?