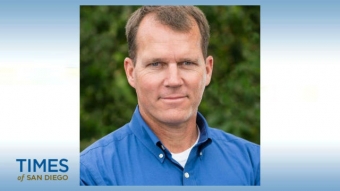 March 20, 2018 (San Diego) - Democratic Congressional Candidate Josh Butner‘s suggestion in an interview that military service should be a requirement to run for national office sparked a controversy Monday.

Butner, a retired Navy SEAL and Jamul-Dulzura school board member who is running against Rep. Duncan Hunter in the 50th District in East County, said in an interview with Voice of San Diego that military service prepares a candidate for political office.

“When you look at anybody for any political office you should look at their past experiences. I served for 23 years. It shows dedication and you’ve been exposed to foreign policy at the tip of the spear. I learned a lot about cultures, in conflict and cooperation. It should be a requirement to have served to even run,” he was quoted as saying in the article posted Sunday.

His chief Democratic opponent, Ammar Campa-Najjar, who has not served in the military but did work in Washington for the Obama administration, responded with messages of support from a number of local veterans.

“Josh suggesting that only people who have served should run for Congress contradicts his record of service. As veterans we swear an oath to support and defend the Constitution and that includes the right of Americans to seek public office,” said Will Rodriguez-Kennedy, a Marine veteran who is president of the California Young Democrats.

“Civilian control of our military is why we aren’t a country with coups. This was short sighted and terrible. We need folks from all walks to serve in public office,” said Shawn VanDiver, a Navy veteran.

Butner is endorsed by Rep. Scott Peters, but Campa-Najjar received the official endorsement of the California Democrat Party.

Everything he touched turned to gold?

When I finally care about politics, every candidate I could see myself caring about turns to trash.

Why I stick with sports.