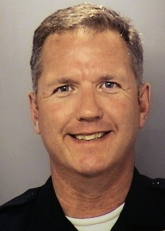 “I asked him all the time if he wanted to go for a promotion, if he wanted to work somewhere else, and he wouldn’t do it,” Capt. Tony McElroy told the Union-Tribune.  Instead, Wilson chose to remain on the beat in Southeast San Diego, an area riddled by gangs, drugs, and violence.

Wilson was known to help homeless people, bringing them food, and would often call parents when he found a juvenile involved in a minor crime, rather than take a kid to juvenile hall. He has resolved other tense stand-offs peacefully and was found to have acted properly in a S.W.A.T. situation in which he fired a fatal shot at a suspect. He later became a trauma counselor, helping other officers who had undergone trauma. Wilson also served as a surface warfare officer with U.S. Navy.

He is survived by his two teenage children, Kaylee, who plans to go to nursing school, and Conner, a student at Scripps Ranch High School. When Scripps Ranch High School’s football teamed played Patrick Henry High in San Carlos, on Friday night, a moment of silence was hel d to honor the slain officer. His son, Conner, spoke. “I’m really happy that all of these people are here. It means a lot to me that they have my back," he said.

Wilson's ex-wife Tracey also spoke, Channel 6 News reported. "He was an extraordinary officer with exceptional talents. He had many opportunities to rise in the ranks but chose to stay where he was in skyline because he felt he could help the people the most in his capacity. He really believed he made a difference."

Ironically, Holim Lee, the man arrested for shooting Wilson, was once hailed as a hero after rescuing an elderly couple from a burning building, NBC San Diego reported. But after becoming involved with drug use, Lee was arrested on charges including robbery, burglary and false imprisonment. Following Wednesday night’s stand-off that killed Wilson and wounded a police dog, Lee killed himself, the San Diego Medical Examiner ruled. Lee’s girlfriend, Lucky Xalasene, was also found dead of a gunshot wound; her death was ruled a homicide. The canine underwent surgery and is expected to recover.

“You know that Officer Wilson always had your back,” San Diego Mayor Jerry Sanders said in a public statement following the shooting.

“Officer Wilson displayed bravery, courage and a commitment to protecting San Diegans from a dangerous individual. His family and many friends are in our thoughts and prayers,” said Brian R. Marvel, president of the San Diego Police Officers Association, in a post at www.CalGuns.net. “His sacrifice will never be forgotten.”