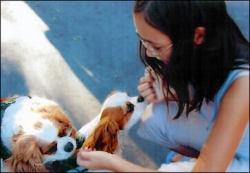 But it was pollution—not low visibility--that bothered Abrams. She had a face mask for herself, but how could she protect Duke and Romeo--her two Cavalier King George Spaniels--from inhaling toxins?

This was not the first time Abrams and her therapy dogs had faced challenges while volunteering for Hope AACR (animal-assisted crisis therapy). The whole point of the nonprofit headquartered in Eugene, Oregon, was ministering to survivors of crisis and disaster. Through 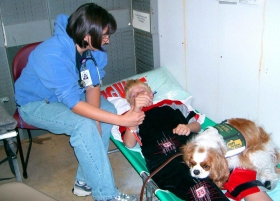 "What stands out most," says Abrams, who explains that handlers and dogs always wear identifying vests, shirts or jackets, "are the countless times we heard 'God bless you' and 'Thank you for being here with your dog.'"

Although AACR handler-dog teams make the program look easy, formal training and certification are necessary. Founded by Cindy Ehlers in 1998 after a high-school shooting in Springfield, Oregon, AACR stipulates that dogs must pass therapy tests and work in the field for at least a year before they qualify to attend two-day crisis response workshops (four days for national certification).

Workshop trainees use role playing to practice basic intervention and self-management skills, animal care and behavior techniques, and strategies for effectively working with agencies such as the Red Cross, FEMA and NOVA. Trainees also must show that their canine teammate can ride on planes or another form of transportation (apart from a car) and act appropriately at simulated traumatic events.

Georgia Whitlock, AACR director for the Pacific Southwest, says 30 of AACR's 100 teams reside in California. Dubbed "hopefuls" and comprised of diverse breeds--everything from chihuahuas, pharaoh hounds and poodles to golden retrievers, Newfoundlands and rottweilers--some have responded to huge national catastrophes, such as the 9/11World Trade Center explosion and Hurricane Katrina.

"We screen for temperament," Whitlock says, pointing out this also applies to human volunteers. The idea is to weed out dogs--and people--who react negatively--for instance, to chaotic situations or scenarios in which you may have to walk long distances or remain standing for lengthy periods of time. 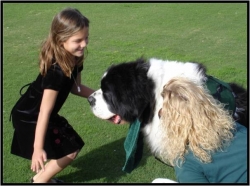 Dave Valantine, Hope's national president, makes "reconnaissance" runs for California teams before teams are dispatched. Last October he and Bailey, his black Lab, visited evacuee centers like Golden Valley High School in Santa Clarita and Qualcomm Stadium in San Diego. At one stop, Valantine met a young couple who had lost all their possessions in the fires. "They couldn't stop petting Bailey," he says. Later, at a nearby base camp, Bailey connected with a weary firefighter, who insisted on keeping the dog on his lap. "Bailey is about 85 pounds," Valantine says, "so it was something to see how much this firefighter enjoyed the visit.

"Comfort in times of crisis": This is AACR's motto. The dogs instinctively tune in to people at risk, says Abrams, a psychotherapist and family/marriage counselor as well as an AACR volunteer. Dogs easily break down communication barriers and provide stress relief. "Handlers don't do desensitization therapy and draw out the person's (feelings) with questions," explains Abrams. "Rather, the dogs and handlers provide a diversion from the pressure of past events. For that moment, people do not dwell on the negative--so they relax their body and mind." 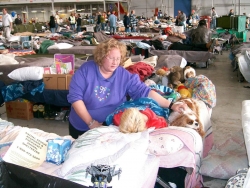 At El Toro High School, Abrams cuts a wide swath through the cots and clusters of families until arriving at the children's play area. She watches as about 20 youngsters, ages two to 15, line up in front of Duke, and later Romeo to see the canines perform tricks. The kids get kisses and dog trading-card photos; the dogs get treats, hugs and belly rubs. Some children walk the leashed dogs inside the gymnasium. "When the kids are wound up," Abrams says, "the dogs change their moods--they become more subdued."

Families experience a sense of displacement in fires, according to Abrams. The women cope by talking, but the men usually retreat. This becomes apparent as a Hispanic man silently touches Duke and sheds tears. "I couldn't take care of my family," he says, finally venting his frustration. Other men put their grief aside and poke fun at the dog. "It becomes an excellent excuse to laugh," Abrams says. "And if anyone witnessed his own animal die, that person often will cry and bury his head in the (therapy) dog," Abrams says. "That's a normal response and a good thing."

Sandra Younger is an AACR volunteer who understands loss. She watched as the Cedar Fire obliterated her home in Lakeside in 2003. Four years later, the October fires seem like ugly reruns. Younger was online searching for information on the imminent threat of wildfires when Terra, her eight-year-old Newfoundland, morphed from companion animal to crisis responder. "She picked up on my frenzy and tension and knocked my hand off the computer," Younger says. "I thought it so poignant that my crisis response dog had broken my panic." Younger later responded to an AACR call-out to Steele High School Evacuation Center in Spring Valley. "One FEMA worker told me in a thick Georgia drawl that Newfs were her favorite breed, and we had made her day," Younger says.

Back in 2006, when a less experienced Younger visited base camps at Castaic and Ventura, she wondered about AACR's benefits. "It didn't seem like much," Younger recalls, "just walking around and chatting, but for many weary and homesick people fighting a long and stubborn wildfire, the Hope dogs did make a difference."

Another California evacuee-turned-responder, Katherine Gigandet of Crestline, says her AACR dog, Pilot, definitely had a positive effect. The flat-coated-retriever/border-collie mix transmitted a "calmness of spirit" that helped Gigandet blot out her worries and listen actively to other evacuees. Gigandet remembers how a woman clutched Pilot and cried out, 'This dog smells good. All I've been smelling is smoke.'"

AN RX FOR RESPONDERS 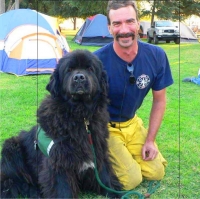 An equally important HOPE goal is to alleviate stress in First Responders. CalFire Captain Julie Hutchinson, of the Riverside County Fire Department, observed this during the 2006 Esperanza Fire. Five firefighters had died, and United States Forestry Service employee Alison Stewart, who had already met with the families of the deceased, had to announce the deaths at a press conference. Her face could not hide the horror of her task, but when the AACR dogs arrived, Stewart's demeanor improved. "It was a sign that life would go on and the pain would lessen with time," Hutchinson says.

CalFire Chief Mike Bratton, manager of Incident Team #4, welcomed this healing power last October at the Poomatcha Fire base camp. He had just finished briefing firefighters about their injured comrades when Whitlock appeared at camp with Tobi, her yellow Lab. "I was glad we were able to be there and let him talk," she says.

AACR dogs help inspire and re-energize firefighters, which improves morale and mental balance, says Robert Lewin, deputy incident commander of CalFire Team 9. Those qualities are key to effective firefighting. "While waiting in food lines, getting supplies or attending briefings, they (firefighters) stop and pet these loving dogs," Lewin says. "It reminds them that life is not always harsh and dangerous, but also joyful, soft and accepting." 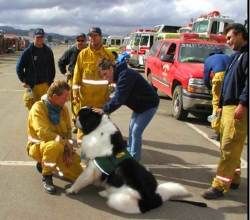 If there is one downside to Hope, it is "compassion fatigue." Usually teams successfully decompress by writing in journals or talking among themselves, although volunteers can occasionally become depressed, as happened to Sandra Younger when she heard a troubling tale of separation and loss from an elderly evacuee.

"He (Horst) told me how much he cared for his dog Schotzi and how he wasn't able to rescue him," Younger says. "It was frustrating not being able to do more." Younger eventually realized her anguish came from too-close identification with Horst. "He was living my own worst nightmare.” There was a happy ending, however. Horst was later reunited with his dog. The animal suffered badly burned paws but was otherwise unharmed.

How can volunteers minimize emotional exhaustion? Abrams instructs AACR workshop trainees to focus on the victims and not on themselves. "Not just any person can go in and do this work," she says." But it gives great meaning and purpose to my life."

Janice Arenofsky is a fulltime freelance writer who has had more than 600 essays, features and profiles published in national venues such as NEWSWEEK, E-ENVIRONMENTAL MAGAZINE, MILLER-MCCUNE.COM, ENVIRONMENTAL HEALTH NEWS and AMERICAN FORESTS. I've written for many pet-related publications, including JUST LABS, CATS & KITTENS, DOG FANCY, BIRD TALK and TROPICAL FISH HOBBYIST. My website is at www.janicearenofsky.com.