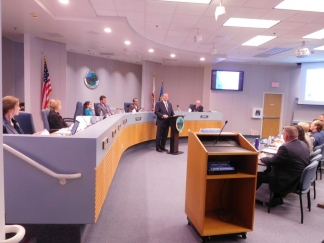 The goals set were honed along with his fellow councilmen and management staff at a workshop held last year.

“As I campaigned for mayor during the summer of 2016, I talked about my vision for the future of Santee. I wanted to see a stronger economy and greater amenities. Amenities like a new teen and senior center, a new public safety center and even a new library,” Minto said.

He said the collective process in creating new strategies has been a marked difference from the way the city was run previously. “I am happy to report the 2017 signals a turning point in the history of Santee for the way we conduct business,” he said. After that, Minto introduced the rest of the five-member council, and the city’s top department managers.

From a list of 10 priorities that he hopes the city can realize in two years, Minto said four are designated for Tier 1 status, and the remaining six are Tier 2 level.

At the top of the list is constructing a new teen and senior center. Next month the council will consider hiring a consultant to conduct a site and cost analysis for the building. The goal is to have a design done by next summer and for construction to begin in 2019, Minto said.

Addressing one of the worst traffic situations in the city, Minto said the council has been working to make improvements to the westbound entrance for Highway 52 at the intersection of Mast Boulevard and West Hills Parkway.

HomeFed Corp., the developer of Fanita Ranch in the northern part of Santee, and Caltrans have entered into an agreement to create a truck lane for on the highway going westbound from Mast to Santo Road, which should relieve some of the congestion, he said.

The city has also applied for a $5 million federal grant from the Infrastructure for Building America fund to address the terrible traffic problems at the site that is routinely in gridlock every weekday morning.

Santee, like virtually every city in the state, is grappling with escalating pension costs, and Minto said his finance team is meeting the challenge. The city recently saved $62,000 by making an advance payment, and is working with other experts to reduce future pension costs, he said.

Minto’s final Tier 1 priority is repairing and replacing aging city-owned storm drains. Heavy storms in March caused drains to fail, resulting in several major sinkholes on private properties, and threatened lawsuits. In the end, Santee spent $1.2 million to correct the problems. The city plans to continue replacing the pipes as a top priority, he said.

At No. 5 on the list is a new public safety center that would serve both the Sheriff’s Department and the city fire department. “The county has set aside a 10.5-acre parcel on the north side of Las Colinas (women’s jail),” Minto said.

After his speech, Minto said the city would share the costs of the center with San Diego County, but there is no estimate as yet on what those costs would be.

Implementing a new building permit system is priority No. 6. The council is scheduled to select a new software system next month that will modernize the city’s current process, Minto said.

Replacing an outdated breathing mechanism for firefighters is No. 7 on the list. Minto said the city has a $230,000 grant to obtain the new equipment, and expects purchase by July.

At No. 8 is the completion of the San Diego River Trail through the city. Various segments are being funded by developers, and one is being funded by Sandag, the regional planning agency, Minto said. The Mast Park trails will start construction in December, he said.

Developing a brand for Santee is the No. 9 priority. “Our goal is to provide a proactive, positive identifier for economic development, recreation and marketing,” Minto said.

Establishing an entertainment district is priority No. 10. The city is negotiating with a selected theater chain for a multiplex cinema just north of Trolley Square Shopping Center. Nearby, the plans call for a Karl Strauss Brewery project that would include a tasting room and restaurant.

Santee is also working to attract another hotel, and to replace a fire truck specializing in fighting brush fires, Minto said.

Summing things up, Minto said several of the priorities are well on their way to being completed, and extolled his colleagues to keep up the good work.

“Look how far we’ve come in such a short period of time,” he said. “The next steps are easy. Just follow the plan!”