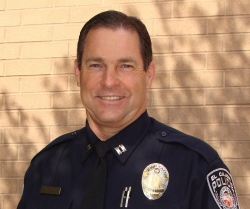 November 16, 2011 (El Cajon)--Acting El Cajon City Manager Rob Turner has announced selection of El Cajon Police Captain Jim Redman as the City's new Police Chief. He will replace Pat Sprecco, who has served as Chief since March 31, 2008 and will retire on December 9.

Redman has been with El Cajon's Police Department nearly 24 years, starting his career as a patrol officer back in 1988.

As a Sergeant, he developed and administered the El Cajon Police Departments First-Line Leadership course designed to address the departments concerns, with succession planning through leadership, ethics, discipline, and mentoring.

The new Chief is long time resident of El Cajon. He and his wife, Roxanne, have been married 24 years and have three grown children.

As Chief of Police, his goal is to lead, motivate and support an enthusiastic and dedicated team of law enforcement professionals who take pride in their work and the community they serve.