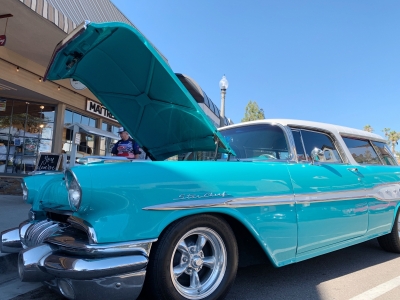 Story and photos by Emily Alessio

July 6, 2019 (La Mesa) -- La Mesa’s classic car show is back! Whether you’re a hot-rodder or a lowrider, there’s something for everyone at this show.

The show and music event complete with bandsis now being held every Thursday night from 5 to 8 p.m. through August 29th. Classic cars line La Mesa Boulevard in the downtown village for the summer show season, sponsored by Johnny B’s Burgers, Brew, and Spirits. 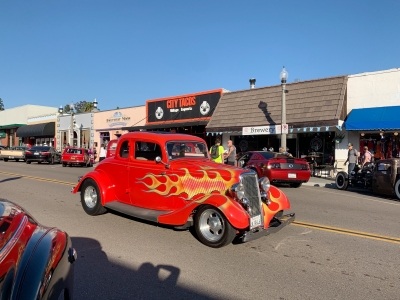 Cindi D’Ambrosia, owner of a shining red and white 1958 Chevy Carrier Apache pick-up truck, has been coming to the show for nearly six years.

A car expert, she says her truck was recently part of an exhibition for the automotive museum in Balboa park. When she’s not at the La Mesa show, Cindi also attends the Run to the Hills Car Show in Pine Valley.

D’Ambrosia’s favorite part of the La Mesa car show is “the cars, and the people that attend.” 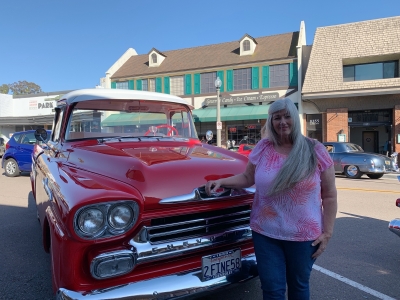 At last Wednesday’s show, La Mesa Boulevard was filled with people of all ages. Local families raved about the show because of how it brings the community together and serves as a visual history lesson for young children. A young car enthusiast raced to have his picture taken with a shiny red Porsche Carrera.

The La Mesa car show is also a treat for more experienced car enthusiasts as well. Phil Capp, owner of a shimmering emerald green 1929 Ford Model A Roadster, said that his favorite part of the show is

“sitting here, on the sidewalk, relaxing, with a beer, and knowing people are happy.” 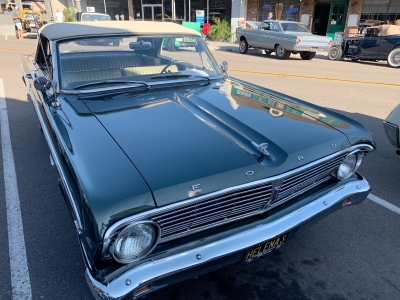 Capp has been coming to La Mesa’s show for about eight years, and appreciates the current organization of the show, especially how the La Mesa Police Department has become more cooperative with entrants who have minor violations, such as a missing front license plate. Car show winners even receive custom medals provided by the 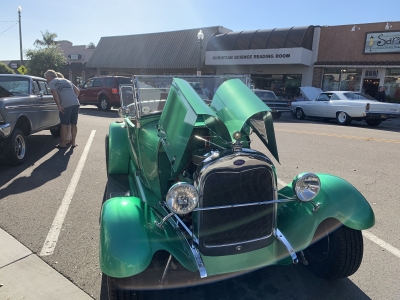 More information and entry forms for the car show cab be found at http://www.lamesavillageassociation.org/events/classic-car-show.aspx.