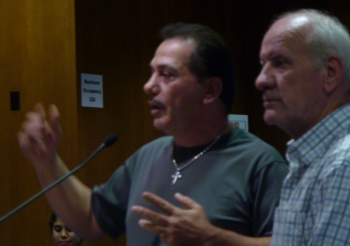 January 15, 2014 (El Cajon) -- Yesterday, two Chaldean men made an appeal to the El Cajon City Council. Shamon Korkis, owner of the URE Restaurant in El Cajon, has applied  for a card room license and been denied. He was an accompanied by a friend, Sam Abbod, who served as translator.

This restaurant has a troubled past. There have been over 20 complaints and Police Chief Jim Redman testified that  the police have found illegal gambling and unlawful selling of alcoholic beverages there in the past. However, Mr.Korkis is the new owner of this establishment, and the vast majority of these complaints were made against the previous owner.

East County Magazine asked Chief Redman what illegal activity if any had occurred under the new owner, and he indicated that card playing had occurred, which is unlawful at restaurants in El Cajon.

The city has previously had issues with a card room and social club where illegal activities were linked to organized crime. Since then, the city has allowed five card rooms to operate, and has had no issues with the other four establishments.

Abbod explained that even though some patrons ran when police showed up at the restaurant, it wasn’t because of any illegal activities – it was because of negative perceptions of police in the customers’ homeland, Iraq.

“The police in Iraq are to shut you up and dominate you,” Abbod said, adding that many local immigrants “are scared of policemen and will run for no reason.” He insisted that Korkis’ establishment is lawful.  “This place…is all for recreation,” he said, adding,”It’s a comfort zone…This is our culture.”

Abbod also suggested that complaints could have been made by Korkos’ competition.

He exclaimed to the Council that Karkos now knows explicitly that gambling, smoking in the parking lot and drinking are illegal, and this establishment is important to support his family. “If we were to take that from him, he’ll have nothing.” 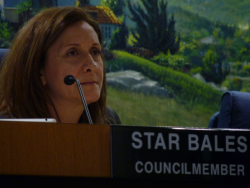 Star Bales, the newly appointed Chaldean Councilmember, asked Abbod if anyone has explained to Korkos the consequences of breaking the law. In her first meeting on the Council, Bales quickly showed the value of having a member of El Cajon’s large Iraqi population in the seat.

The City Attorney recommended that Bales verify authenticity of the translation. Later, Bales, who speaks Arabic and Aramaic, addressed Korkos directly in his native language. She asked if the City could advise Korkos on steps to take.  “I would like to help him as a small business owner,” she said, noting that complaints were primarily against the prior owner.

Despite pleas from Korkos and Abbod, however, the Council unanimously voted to deny the appeal, but left the door open to reconsider a different business plan more focused on restaurant services without card playing.