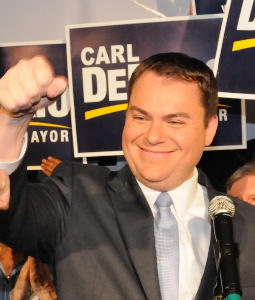 By Miriam Raftery
File photo: Carl DeMaio on election night
August 5, 2019 (San Diego) – Former San Diego City Councilman Carl DeMaio is the latest Republican to announce plans to run for the 50th Congressional district seat currently held by indicted Congressman Duncan D. Hunter.
DeMaio formerly ran for Congress in the 52nd Congressional district, but lost to Scott Peters in 2014. There is no federal requirement for Congressional candidates to live in the district they seek to represent. De Maio also ran for mayor of San Diego in 2012, but lost to Bob Filner. He led a successful effort to put a pension reform ballot on the initiative which was approved by Sa Diego voters in 2012, but later led a losing battle to repeal the state’s gas tax in 2018.
Currently a conservative talk radio host on KOGO Radio, DeMaio will be required to step down from the airways while campaigning due to  FCC regulations.
DeMaio has in the past espoused some positions at odds with the Republican platform including support for gay marriage and abortion rights, the National Journal reported in 2014. But he holds conservative stances on issues such as immigration, border security and taxes.
DeMaio held a press conference today to announce his candidacy in what he characterizes as an effort to save Republican’s control of the only GOP Congressional seat left among San Diego’s five Congressional districts.
He states,  “Too many Californians are fleeing our state because of the extreme socialist agenda being imposed on us by Democrat politicians, but I refuse to flee: I choose to stand and fight,.” DeMaio claims California voters face two choices. “Socialists or ineffective cowards.”
The latter remark is a slap against Hunter, who goes on trial in September on 60 federal corruption counts including conspiracy, wire fraud and records falsification. He and his wife, Margaret, have been accused by federal prosecutors of stealing a quarter million dollars in campaign funds spent on a lavish personal lifestyle including overseas family vacations as well as Hunter’s overnight stays with five different mistresses.
Hunter’s wife has pleaded guilty to a single count and is cooperating with prosecutors. Hunter insists he is innocent.  He tried to blame prosecutors as politically motivated but a judge dismissed a Hunter ruling that sought to disqualify the prosecutors or move the trial outside of San Diego County.  Thus far,  Hunter has said he has no plans to resign, though that could change if he cuts a deal with prosecutors or is convicted before the March 3, 2020 primary election.
Ammar Campa-Najjar is the Democratic candidate who came within four percentage points of defeating Hunter in November 2018. He is running again, with major financing. Campa-Najjar has never identified as a socialist and is running on a platform of bringing jobs to the district and reforming healthcare.
Four other Republicans have indicated they plan to run for Hunter’s seat if he is not in the race, including El Cajon Mayor Bill Wells, former Escondido Mayor Sam Abed, Temecula Mayor Matt Rahm and former Navy Seal Larry Wilske.