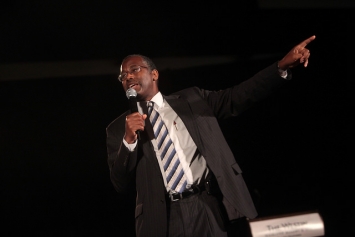 November 8, 2015 (Washington D.C.)—Our nation’s first president, George Washington, once said, “I hope I shall possess firmness and virtue enough to maintain what I consider the most enviable of all titles, the character of an honest man.”   President Abraham Lincoln was so noted for his integrity that he early on earned the nickname “Honest Abe."

But at least one presidential candidate today--and possibly several, may fall far short of those ideals. The latest in the spotlight this week is Republican candidate and neurosurgeon Ben Carson. Major media outlets have exposed that Carson made unsubsantiated claims about a West Point scholarship as welll as his troubled juvenile past.  Ironically, questions have also been raised about Carson's claim of being named most honest student in a psychology class at Yale University, though new evidence suggests this claim may be true.

In his autobiography,”Gifted Hands,” Carson wrote that he obtained a “full scholarship” to the West Point military academy. But a Politico investigation revealed that West Point says Carson never applied to the military academy. Though Carson slammed Politico and claimed the media was trying to “discredit” him after the story ran, he admitted to the New York Times that he never applied, let alone gained admittance to West Point—and admission is required before any financial aid is offered.

Carson has also talked about his transformation and redemption from a violent youthful past, claiming in his past he hurled bricks and rocks at people, even engaging in beatings with a baseball bat and a stabbing. But a CNN investigation that included interviews with many youthful colleagues of Carson’s failed to find a single person who could confirm any of his stories. Carson accused CNN of a “witch hunt” but he declined to provide any corroborating evidence to support his claims.

The Wall Street Journal decided to investigate another bizarre story of Carson’s in which he claimed a teacher tested the class to see who was the most honest student, and Carson won. That story was initially reported by major media to be a hoax, too-apparently based loosely on a story published in a Yale parody newspaper.  However, one day after our original story ran, a classmate of Carson's came forward to report that the prank test described by Carson's did occur, Buzzflash, a progressive news site reported. Though no other student has yet come forward to corroborate the claim, it appears plausible that Carson may be correct in his recollection on this incident.

Carson is not the only candidate in the race to face questions about honesty and ethics.  Democratic front-runner Hillary question has faced a Congressional probe and FBI investigation over her use of private e-mails while she was Secretary of State.  Carly Fiorina's description of a Planned Parenthood video were found to be exaggerated, as were some of her claims regarding Obama's economic record.

There is a difference, of course, between remembering figures or a video's content incorrectly and intentionally inflating biographical details.  Another key factor for voters to weigh is whether a candidate admits if he or she was mistaken, or stands by a provable inaccuracy.

While many candidates fall short of the honesty standards set by early presidents, only voters can determine how much integrity matters in choosing which candidate to support for the nation's highest office.

sorry but hillary admitted to lying about the video and by extension barryo and the rest of his gang lied also. the video had nothing to do with the murders of 4 American citizens. also I never saw any articles regarding obama's past in 2012 or before. politico and others have pulled back and the politico piece was a racist hit piece against a black man not stuck on the democrat plantation. lets focus on the truth and that is democrats get a pass from the media

Unlike some politicians, when we make an honest mistake based on the best information available at the time, we issue a correction.

One day after our story ran, a classmate of Carson's at Yale came forward to say he believes the hoax test story to check students' honesty at Yale likely did occur, though some other students have said don't recall this incident.  We have corrected our story to reflect this new information, and also added some context with details on at least two other current candidates who have faced questions regarding their veracity.

It's not a "whopper" to report the best information available at the time.  When new information surfaces that contradicts earlier information, whether that's regarding changes to a wildfire evacuation order or a witness found who sheds new light on a previously published story, rest assured that we will do our best to get the most accurate and up to date information to our readers.

when you go after hillary for the sniper lie, her name lie, the Marines lie, the e mail lies, the Benghazi video lie, and more then maybe there is some credibility. how about bill hanging with a convicted pedophile and the numerous allegations regarding assaulting women?

otherwise a racist hit piece on a conservative black man

regarding email and Benghazi controversies.  Multiple Congressional committees chaired by Republicans failed to find any substance to the Benghazi allegations, but the issue of classified emails remains under investigation and certainly is problematic for the Clinton campaign.

There is nothing racist about reporting on potential scandals or veracity of someone who is currently polling as the front-runner in the Republican race, Carson.  Obviously we've had both positive and negative coverage of Obama, a black liberal, and other African-American candidates through the years. So let's stick to discussing the facts regarding the issues at hand, not toss the race card out as a red herring.

Any single slip might be explained but there are so many with Carson - and the story about the college class where his honesty was tested has zero basis in fact and seems to have been lifted and adapted from a hoax/parody story published in a college paper that Carson represented as true and twisted to suit his needs. These weren't tales told long ago; he's repeated these on the campaign trail.

For the record we're not partisan in educating readers about potential flaws in candidates. For instance we recently ran a story in our bookshelf section on a book titled Clinton Cash that raised concerns about foreign government and corporate ties to Hillary and Bill Clinton.

Readers of course are free to make up their own minds.

I have no clue why anyone would object to citing presidents widely noted for integrity and honesty, qualities that too many modern day politicians seem to disregard, some more than others.  We learn from history, and we should not forget it.

Conformity to facts and accuracy are important when considering this hit piece. The article (let's stick to that) quoted Washington as saying he hoped he would be honest, and then stated that Carson "today falls far short of those ideals." Short of the ideal that Washington hoped for? Really..... Honest Abe Lincoln? He got that nickname because he was considered to be honest in what he did, not what he said. Lincoln was an honest referee at cockfighting events. Due to his honesty over the fights he soon developed the name Honest Abe. I suppose that Dr. Carson is an honest brain surgeon. Doesn't that count? Carson stretched the truth in a college paper? He was a kid.
According to news report, Carson never said that he obtained a “full scholarship” to the West Point military academy. He said that General Westmoreland in a dinner conversation offered Carson a full scholarship. Okay, granted that West Point says "tuition free" rather than "full scholarship" but so what. Are we all completely cognizant of West Point language? Just because Carson is a brain surgeon doesn't imply that he;s perfect, does it. And comparing Carson the person to what George Washington said and what Abraham Lincoln was called by some is a real low, together with what "many youthful colleagues of Carson" can or can not remember.